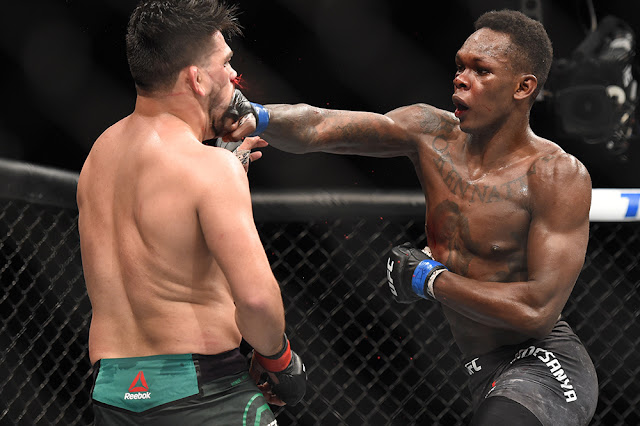 The Nigerian Born Kiwi dropped Gastelum (15-4 MMA, 10-4 UFC) more than ones in the final round of their scheduled five round bloody fight and in winning, became the 10th fighter in UFC history to win a title with an undefeated record.

The win sets up the “StyleBender” for a future unification fight with UFC middleweight champion Robert Whittaker.

The opening round was dominated by Gastelum, who was more aggressive and took to the center of the ring for exchanges  with numerous take down attempts. Adesanya fought from range and picked his shots accurately, carefully and using movements to avoid Gastelum aggressive blows.
Adesanya was more aggressive in the second, landed a few kicks and also took a few heavy shots from Gastelum, who still looked aggressive coming forward but that left him open to counter attacks from Adesanya, who with one of his counters knocked his opponent off balance early in the round.
Gastelum went for take downs but failed in each time, especially after being wobbled and his head snapped back an upper cut.