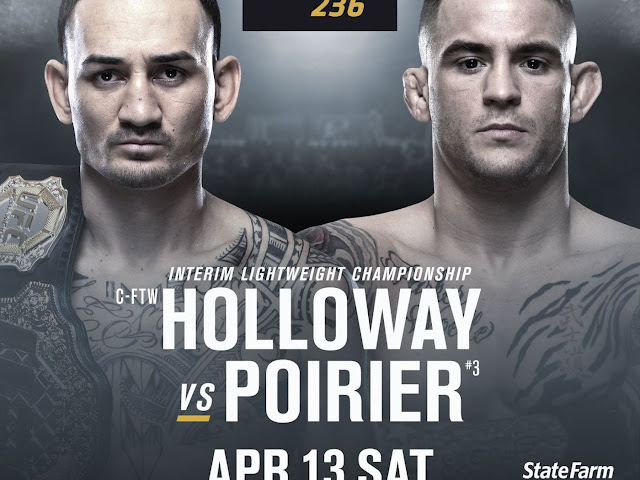 Ultimate Fighting Championship (UFC) heads back to Atlanta with a Blockbuster Card – UFC  236, which features a dual championship bill, headlined by Max Holloway vs. Dustin Poirier and  scheduled to begin on Saturday, April 13, at 6:30 p.m. ET / 3:30 p.m. PT.) ESPN+ pay-per-view.

The UFC featherweight champion Max Holloway will be moving up into the lightweight division to face top contender Dustin Poitier in a rematch for the interim lightweight title and the winner will then be next in line to face UFC lightweight Champion Khabib Nurmagomedov, when he is ddn with his suspension.

Max Holloway defeated Dustin Poirier in their first fight over seven years ago and has since dominated the featherweight division.

The co main event will have Kelvin Gastelum defend his interim middleweight title against Israel Adesanya.

Gastelum was scheduled to face Robert Whittaker for the undisputed title at UFC 234, but the bout was canceled, after Robert Whittaker got rushed to the hospital for for a hernia and collapsed bowel.  Isreal Adesanya defeated Anderson Silva in the make shift main event to earn himself a shot at the interim belt.