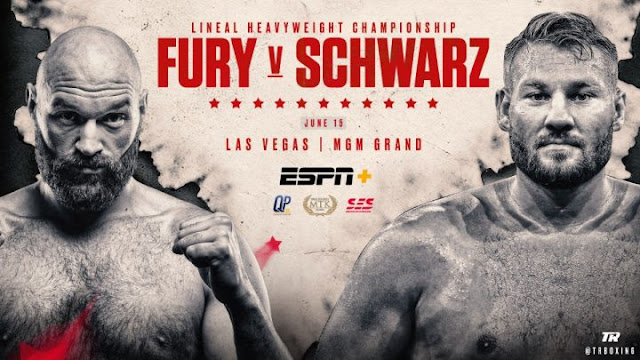 The fight which is scheduled to take hold on June 15th, will be Tyson Fury’s first appearance since his controversial split draw with WBC Heavyweight World Champion Deontay Wilder and will also be his debut in Las Vegas.

Delivered by FeedBurnerRichard Sturm, President of Las Vegas Live Entertainment and Sports, said, “We look forward to hosting the Fury-Schwarz heavyweight fight at MGM Grand on June 15. These two exciting fighters, known by boxing fans worldwide, will be sure to put on a blockbuster event this summer.”

Tyson Fury got knocked down twice in his title fight with Deontay Wilder, including a 1 – 2 combination that almost seemed the end of the fight but surprisingly, Fury made it back to his and was believed by many to have won the fight despite the Judges, scoring it a slit draw.

Tom Schwarz is rated No 2. by the WBO and has won his last six fights via knockout. However, only two of his fughtf have been fought outside his hometown Germany and this will be his first time in the US.

The fight will be promoted by top Rank , in association with Frank Warren’s Queensberry Promotions and SES Boxing.