Skip to content
HomeSports NewsTerence Crawford, Ready For 12 Round Battle With Amir Khan

Terence Crawford, Ready For 12 Round Battle With Amir Khan 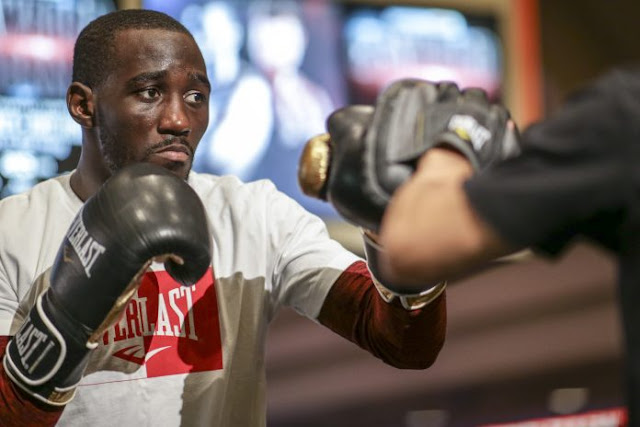 ↑ Grab this Headline Animator
Terence Crawford says, he doesn’t want to test Amir Khan’s chin on April 20th, but he will be looking for all possible ways to win the fight.
Crawford is highly regarded when it comes to pound for pound ratings and will be making the second defense of his WBO Welterweight world title against Brit Amir Khan on ESPN Pay-Per-View telecast live from Madison Square Garden, New York City.
Despite the fact that Amir Khan has been Knocked down 11 times in his pro career and has all the Book Markers against him, Crawford isn’t over looking the British fighter and will be covering all possible short comings in training ahead of the fight.

“I don’t look at (his chin), I look at how to get the win,” Crawford (34-0, 25KOs) insisted during a recent media conference call, dismissive over the thought of simply ending the fight the moment he lands a clean shot. “If the knockout comes, it comes. It’s boxing, anything can happen and we’re prepared to go the full 12 rounds.”

The Three Division champion knocked out Jose Benavidez Jr. in the 12th round, with just 18 seconds remaining in the ESPN broadcasted show last October. The 10th of his 12th title fight career stoppage victories.

Crawford has many attributes that make him win fights  coupled with an all round ring IQ that leaves all his fighters struggling in the ring but the 33 year old believes he needs more than attributes and ring IQ to defeat Khan, who brings a lot to the ring.

“I know the troubles I can have with a fighter like him,” Crawford admits of England’s Khan (33-4, 20KOs), a former 140-pound titlist who is 5-0 as a welterweight but also a massive underdog. “He has everything to gain and nothing to lose.
“We have to take this fight real serious. A lot of fighters think they have victory in the bag and haven’t even fought the fight yet.”