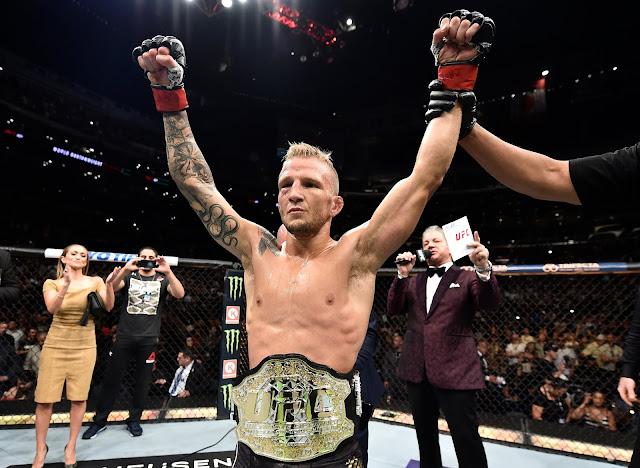 Former UFC Bantamweight Champion T. J Dillashaw has been given a two year suspension for testing positive to a banned substance “recombinant human erythropoietin (rHuEPO)” the US. Anti Doping Agency has announced.

Dillashaw’s suspension has been retroactive since Jan 18. and tested positive during a test carried out during his failed bid to defeat UFC Flyweight champion Henry Cejudo in UFC on ESPN+ 1.

Few weeks back, Dillashaw relinquished his UFC Bantamweight title with an announcement that he has been found with something not so good to this career, without making known what it was exactly. He was later fined by the NYSAC $10000 and given a One year suspension.

The UFC has booked the UFC Flyweight champion Henry Cejudo Vs 135 pounds No. 1 contender Marlon Moraes for the Vacant UFC Bantamweight title, which is set to take place June 8th UFC 238.

USADA released in a statement, rHuEPO is a synthetic hormone that is used to stimulate the body’s production of red blood cells, thereby causing increasing oxygen transport and aerobic power. It’s in the class of peptide hormones, growth factors, related substances, and mimetics and is banned at all times.

“We all know the pressures to win at all levels of all sport are real and intense,” USADA CEO Travis T. Tygart said in a statement . “It is exactly why strong anti-doping efforts are necessary to protect clean athletes’ rights, health, and safety, and to ensure that those who do succumb to these pressures and decide to break the rules will be held accountable in a real and meaningful way, as in this case.”