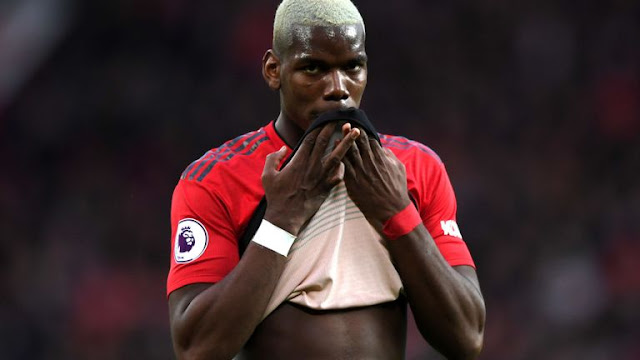 ↑ Grab this Headline Animator
Paul Pogba during the International break fueled a possible Real Madrid transfer speculation, saying it will be a dream come true for any player to play for Real Madrid.
However, Manchester United Manager Ole Gunnar Solskjaer has thrown in some chill water on the speculation, claiming the Midfielder is happy playing for the Red Devils.
Paul Pogba had expressed his admiration for the former French international and Real Madrid Boss Zinedine Zidane, also admitting he will love to play under him.

Solskjaer told Sky Sports News : “Definitely. I said that a few years ago as well.
Highlights from Manchester United’s 2-1 win over Watford in the Premier League
“Paul is happy here, he is playing well. There was talk about the international break and what kind of issues that causes.

“One of the issues is, the players are always available for the press. They are open, and he answered a general question about any player would like to play for Real Madrid.
“He didn’t talk about himself, he is happy here.”

Ole Gunnar Solskjaer is confident that players, especially the ones running out of contract will sign new deals. Now that the Managerial issues has finally been concluded.

“At least now players that are being offered contracts, they know who their manager is going to be,” he said.
“I know that I’m staying so it’s not just my advice anymore, it’s my wishes that we are working with.”