Robert Easter Jr. And Rances Barthélemy Fight To A Draw 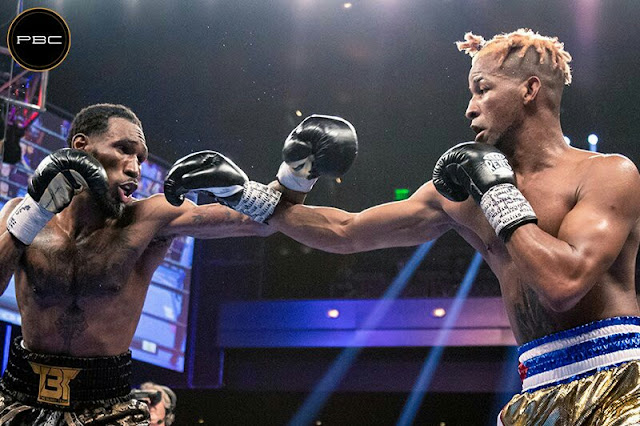 Robert Easter Jr. and Rances Barthélemy fought to a split draw in their title bout on Saturday night. The Judge Tim Cheatham scored their disappointingly dull 12 round fight 115-113 for Easter. Judge Eric Cheek scored it 115-113 for Barthélemy, while the third judge Glenn Trowbridge, had it even (114-114).

The bout actually lacked action in many rounds and some with no notable punch. With the result, the WBA world lightweight title remains vacant because the fighters couldn’t win the main event of Showtime’s tripleheader from The Chelsea inside The Cosmopolitan.

Robert Easter (21-1-1, 14 KOs), of Toledo, Ohio  was the aggressor for most of the fight, while his opponent avoided his reach and expressed his disappointment in his failure to become a two time lightweight Champion.

Rances Barthelemy (27-1-1, 14 KOs, 1 NC) spent most of the fight moving backwards and out if Easters reach. He fought in a Southpaw stance for most of other fight and troubled Easter with some flush hooks in the early rounds.

Both fighters failed to become two time Champions because like Easter, Barthélemy had ones held the IBF lightweight title.

Easter failed to bounce back from his Unanimous Decision loss to Mickey Garcia in their 12 round lightweight title unification fight in July 28 at Staples Center in Los Angeles.