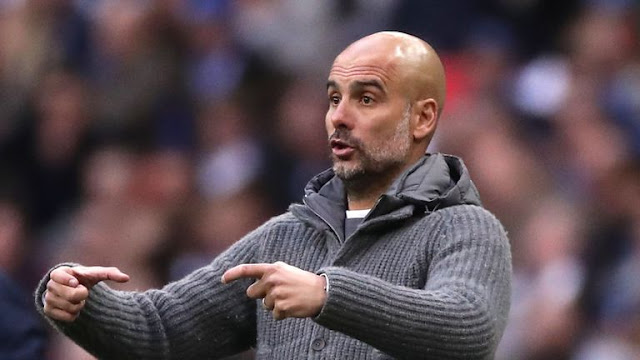 ↑ Grab this Headline Animator
Pep Guardiola and his team Manchester City have had an amazing season and have already won the EFL Cup, already in the FA Cup Final, in the UEFA Champions League Quarter Final and are also one of the favorites to win the Premier League this season.
Guardiola believes that his team could be winning a quadruple this season, though saying it is “always almost impossible” to do it, especially after creating such a Premier League record last season.

“It is always almost impossible to win the quadruple,” said Guardiola. “To still be surviving at this stage in all competitions is already a miracle, and it’s nice to be there.

“Normally when you achieve 100 points [last season], no one can repeat that, and the year after you have a tendency to be a bit more arrogant or presumptuous. But still we are there, it’s incredible what these players have done so far.”

Manchester City scored their goal, which ended up the only goal of the game early in the fourth minute but looked like they were going to be winning by big margins after the goal.

Brighton made City fight for the final and this ended up drawing praises from Guardiola for their incredible defense.

“It was tough because they defended incredibly well and they were well organised,” continued Guardiola.
“After that it was tough for many reasons but I’m happy to be in the final and still in all the competitions.”