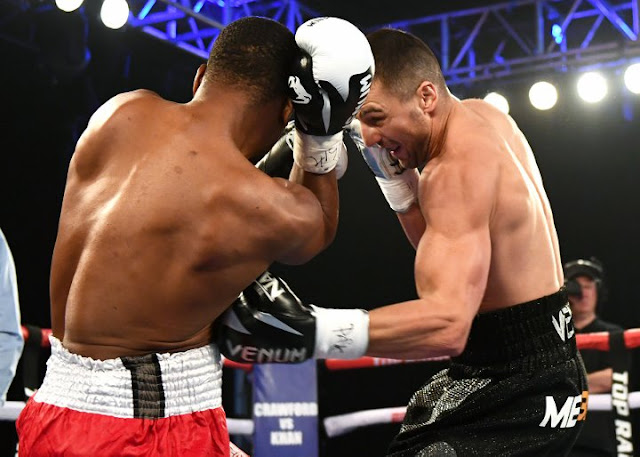 ↑ Grab this Headline Animator
Oleksandr Gvozdyk defended his WBC light heavyweight title for the first time, with a fifth round Stoppage over Congolese Doudou Ngumbu. The bout was televized live on ESPN and was stopped at exactly 58 seconds into the fifth round.
Gvozdyk (17-0, 14 KOs) was declared the winner after Ngumbu suffered an apparent right Achilles’ tendon injury, a prohibitive injury at the at the 2300 Arena in South Philadelphia
Gvozdyk came to this fight on the back of an eleventh round knockout victory over Former WBC light heavyweight Champion Adonis Stevenson back in December 1st in Quebec, Canada.

Prior to the fight, Ngumbu was only knocked out ones in his 12 year pro career and that was against France’s Nadjib Mohammedi in June 2015.

Gvozdyk pressured Ngumbu, backing him up against the ropes, landing steady combinations till his opponent took a knee. The fight was paused for a while but called off after the Congolese couldn’t continue.

Ngumbu drops to 38-9 with 14 knockouts, after his unsuccessful World Title shot.