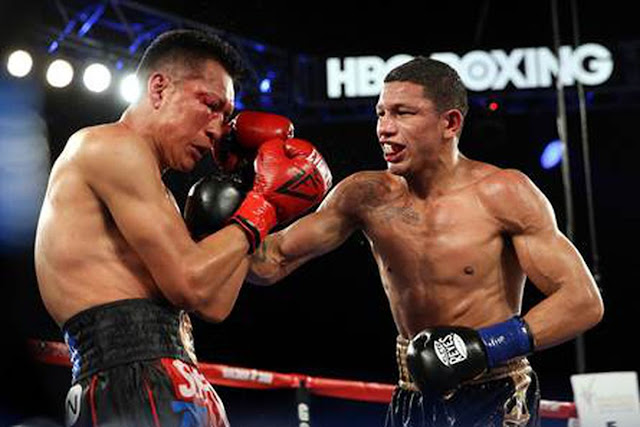 ↑ Grab this Headline Animator
Miguel “El Alacran” Berchelt (35-1, 31 KOs) and Francisco “El Bandido” Vargas will stage the rematch of their epic and entertaining battle withnessed two plus years ago.
Issac Dogboe will have an opportunity to avenge and reclaim WBO junior featherweight world title against champ Emanuel Navarrete, who defeated him via unaunanim decision back in December 8th to win the belt.
Berchelt defeated Vargas via eleventh round stoppage to win the title back in 2017 and will be making his fifth defense of that title with Vargas getting an opportunity to redeem his name, when they meet at the  Tucson Arena, Tucson Convention Center.

Berchelt (35-1, 31 KOs) is riding on a 14 fight winning streak. A record he has accumulated since his first round controversial knock out loss and since then, became interim champion before meeting Vargas. Both made the fight a back and forth affair till Berchelt eventually wore him down to a TKO in the eleventh round. He was busy through out 2018, fighting thrice with his most recent being the 9th round stoppage win over Miguel Roman.

Vargas (25-1-2, 18 KOs), has been a good fighter that always brings to the ring a fight of the year contender, year in year out. He has won that accolade twice in 2015 and 2016, when he with a very badly bruised eye, fought back to knock out Takashi Miura in the ninth round. And the next year, he fought with Orlando “Siri” Salido in a seesaw battle that ended in a draw and most recently stopped Rod Salka in six rounds to open ways for this Rematch.