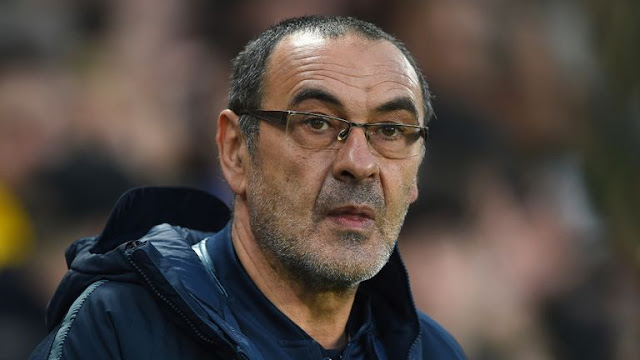 Chelsea Boss Maurizio Sarri has maintained that Manchester United clash on Sunday is a must win for The Blues, as they look to seal Champions League Qualification with three games left in the season.

Chelsea lead Arsenal with one point in Fourth and three points above their Sunday opponents Manchester United and Maurizio Sarri believes that beating United on Sunday might probably be bigger than their top four target.

“The match is clear; it is probably more than important for our target.

“We will try to win, of course, but we need not to lose. It’s a very difficult match for both, I think. We have to play against opponents with a very high level of motivation after the Manchester derby.

“But we have to try. We have two very important targets at the end of our season. The first is the top four and the second is to get to the final of the Europa League.
“For the first target, this match is more than important for us and for our opponents.”

Delivered by FeedBurnerSarri will be without N’golo Kante, who has been a very key figure in the Chelsea midfield this season. The influencial midfielder was taken off at half-time in the game against Burnley.

Concerning another absentee Callum Hudson-Odoi, Sarri gave positive updates on the winger who ruptured his Achilles in the same game and also believes the forward will need time to heal.

“The operation of Callum went the right way. I think he will be back here in one or two days. Of course he needs time now, but Callum is a very strong young man – physically and mentally. I am sure he will be able to return better than before.
“It depends [but] for sure, three months. Then we have to see the condition, because you can be able to play but we need a player at the top. The technical period is three months, no less.”