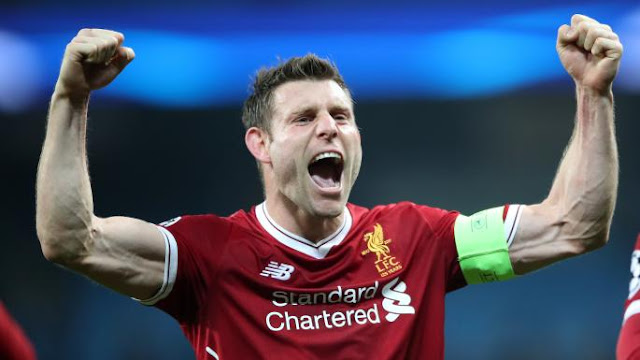 James Miller is willing to give up rivalries, history and opinions to become a Manchester United supporter for the first time in his 17 year professional career, as they take on Manchester City on Wednesday.

Liverpool presently lead Manchester City with two points at the top of the Premier League Table, with City having a game at hand that also happens to be the Manchester Derby.

Manchester City with be restored back at the top with a point lead, if they are able to defeat Manchester United At Old Trafford on Wednesday, with three games left for the season.

“First time in my life,” Milner said about his support for United this week.
“But I won’t be watching. It’s a bit of a waste of energy, willing the ball in the other goal.
“I can’t do anything about it. I’ll maybe put my phone away for a few hours and check it after. I’ve no idea what I’ll do, maybe go out for some food.”

Delivered by FeedBurnerLiverpool have Huddersfield Town, Wolverhampton Wanderers and Newcastle United To play, while Manchester City will after United play Burnley, Leicester City at Home and Brighton & Hove Albion on the final day.

Milner maintains that Manchester United isn’t the only challenging fixture in City’s run in and that any team, no matter their position on the League table could make things difficult.

“There’s three games left after that (United). People think United is a challenge, but it’s not the only one” he said.
“It’s an old cliche, but the Premier League is tough – whoever you play, teams battling at the bottom.
“Go back to QPR (when Milner won the title at Man City on the final day) and it’s not easy when you’re playing to win a league title.”

Liverpool retained their two point lead at the top of the table with a 2 – 0 victory over Cardiff City during the weekend, with Milner converting a late Penalty to score his seventh goal of the season.