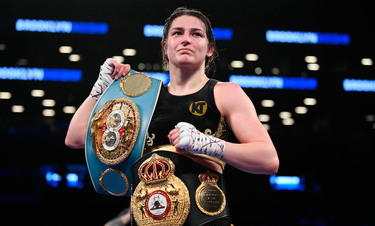 Katie Taylor will be fighting Delfine Persoon for the Women’s undisputed lightweight crown, with all four belts at stake on June 1, at Madison Square Garden in New York City.

The unification fight be the chief supporting bout of Anthony Joshua Vs Jarrell Miller card and the winner will join the recently crowned Undisputed middleweight champion Claressa Shields in unifying their respective divisions.
Taylor is coming off a 9th round stoppage of Rose Volante, a fight that saw her unify three of the four available belts. Persoon on the other hand, has been dominant in the women’s lightweight division.

Persoon (43-1, 18KOs) is coming off a stopping Melissa St Vil to retain the belt last March and hasn’t lost a fight for about eight years.

“It’s great that she has finally signed for the fight and I’m delighted that Eddie has been able to make it,” said Taylor (13-0, 6KOs) who makes the seventh defense of at least one major lightweight title. “After my fight last month I went back home for a week but then it was straight back to Connecticut to start the hard work in training camp for this fight.
“When I turned professional my first goal was to win a World title but then my next priority was to become undisputed champion so obviously this fight gives me the opportunity to do that so it’s massive for my career.”

“This is a very unique opportunity for me and I’m thankful we’ve got the fight made,” said Persoon, who makes the sixth defense of her World Boxing Council (WBC) lightweight title, the lone belt for which Taylor has yet to compete as a pro.“I did not have the opportunity to participate in the Olympic Games and now I get the chance to compete with the Olympic champion in Katie Taylor. I expect this will be a very tough and honest fight, and that the best boxer may win this title fight – and I expect that to be me.”