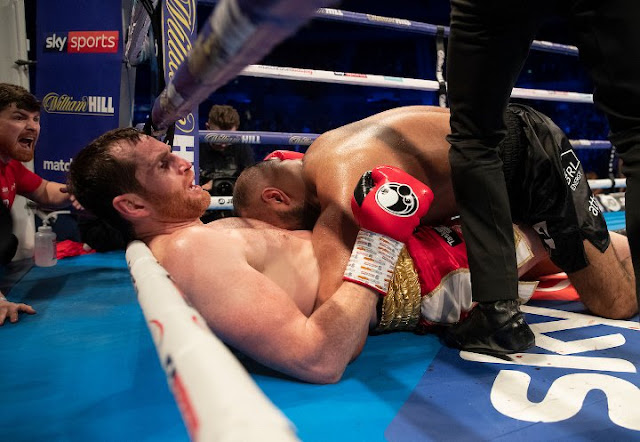 British Boxer Kash Ali has finally been penalized by the British Boxing Board of Control for biting David Price during a non title fight in Liverpool before it was stopped in the fifth round by the referee.

Kash Ali was temporarily suspended by the BBBofC and had his estimated purse of £20,000 withheld pending a hearing. However, he has now been officially given a six month suspension and a £10,000 fine for the incident.

Ali had however, issued an apology after the fight.

“I am hugely embarrassed for my actions and the way the whole fight unfolded.

“The occasion got the better of me and those who know me, including David, can testify that my behaviour on Saturday during the fight was not a true reflection of who I am.”

Delivered by FeedBurnerDavid Price expressed his surprise in the incident but believed his opponent and former sparring partner was only looking for a way out of the fight by Biting.

Price, who clearly didn’t seem to hold a grudge also believed that Ali didn’t really mean to bite him because, it would have been a lot worst.

“If he wanted to he could have torn a chunk out of my skin – but he didn’t. He didn’t do it hard enough to do that because he didn’t want to, he just wanted to do enough to get thrown out, in my opinion.

“It probably would have hurt a lot more if the adrenaline wasn’t pumping, but because it was out of the blue and wasn’t expected, I didn’t feel the pain as much. It was a strange experience. The fight has happened now and, although he did bite me, it could have been a lot worse. Everyone makes mistakes. At the end of the day, he’s made a big mistake. It’s boxing and you do what you can to get in your opponent’s head or give yourself an edge – but bringing the teeth out was the last thing I thought would happen.