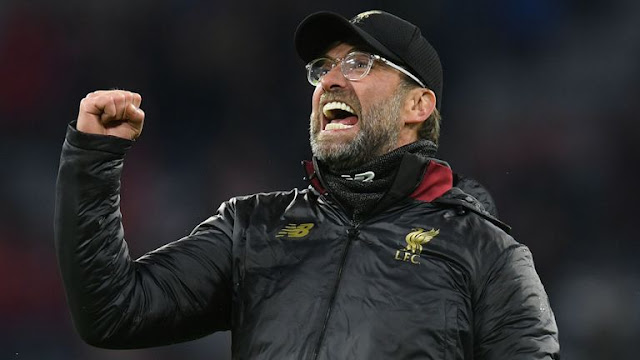 Liverpool Manager Jurgen Klopp Says he is living his dream of leading Liverpool to contend for major trophies, with the club leading the Premier League and also one step through the Quarter Final with a 2 – 0 win over FC Porto at Anfield on Tuesday.

Liverpool FC are leading the Premier League, with hopes of winning their first Premier League Trophy since 1990 and have already defeated Portuguese Champions FC Porto at Anfield.

“When I was a young manager, I was always dreaming of having a team of world-class players with the attitude of a proper challenger,” said Klopp.
“That is actually what I love, and we showed that, especially in the Champions League very often.

“We all know what happens if the boys do win something. That changes everything. But in this moment, we should not think about that. As a club, as a group, with all our supporters we should enjoy the situation because it is so different.

“Last year we had proper pressure in the last part of the season. Chelsea was winning each game and we were drawing, after being 10 points ahead. In the end, we had to win the last game again to qualify for the Champions League.”

Klopp also expressed his love for the progress his side has made and also compared his achievements this season with that of last  when his team made it to the UEFA Champions League Final.

He praised his team for their progress and their potential in making another champions League final.

“We don’t expect, or take it for granted, that we will be in the Champions League final again but having the chance again is really unbelievable,” Klopp added.

“On the other side, we have made this big step in the league. We are responsible for the league not being decided yet.
“In all other seasons, we would have probably 60-something points and be fighting with five other teams for three places behind City.
“This is completely different. I love this season much more.”