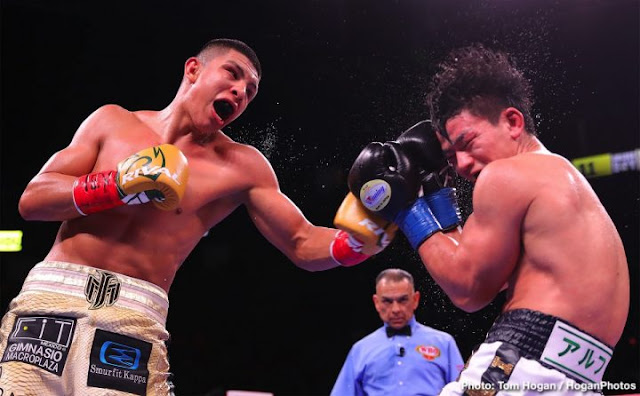 ↑ Grab this Headline Animator
WBO Junior Middleweight Champion Jamie  Munguia (32-0, 26 KOs) will be defending his title against Mandatory challenger and No. 1 rated Dennis Hogan (28-1-1, 7 KOs) on April 13 on DAZN at the Arena Monterrey in Monterrey, Mexico.
The WBO had ordered the mandatory defense and scheduled the purse bid for March 4th, which later got canceled due to both sides reaching an agreement before the date. Munguia will be making the fourth defense of the 154 pound title since defeating Sadam Ali to take it.
Munguia successfully defended his title with a unaunanim decision against Takeshi Inoue and was taken to the edge trying to do it, despite the wide scores from the judges (119-109, 120-108 and 120-108).
Denis Hogan is on four Fight winning streak since losing Jack Culcay, raking up wins against Angel Hernandez, Samuel Colomban, Yao, Yi Ma, Yuki Nonaka, ‘Jimmy’ Kilrain Kelly and Jamie Weetch to earn the shot.