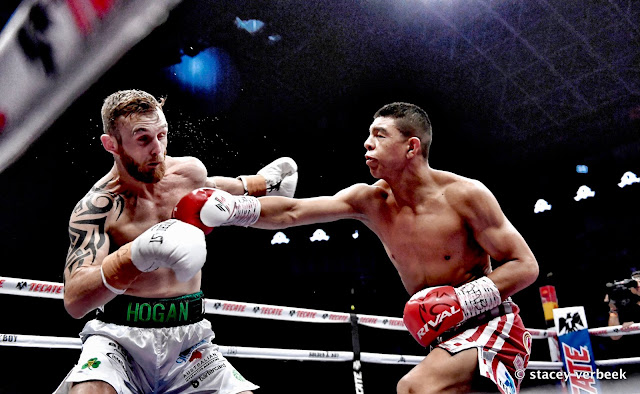 Hogan (28-2-1, 7KOs) dished out to Munguia the toughest fight of his career, a mandatory kind of fight and had him struggle to unleash his defense with Constant lateral movement that frustrated Mexican in the opening rounds.

Munguia then had a period of success between the there and fourth, where he scored big right hands at differently points in the ring but Hogan kept laughing, when he his caught and his shots dramatically reduced, while Hogan picked momentum.

Munguia ruled round five with power shots, cornered Hogan landed many offensive shots and seemed to have finally taken over the fight. The period last for a while but each time faded dramatically, as the champion ends up at the receiving end.

It was clear the champion couldn’t just dominate the fight and his corner got a little worried, head trainer Robert Alcazar begged his charge to pick up the pace and begin taking rounds in far more dominant fashion.

That was to no avail, as Hogan dominated the Champion in the 10th round, constantly frustrating Munguia with his in and out movement. He was landing at will and even rattled the Champions Legs with a a big right hand at the start of the eleventh.

Munguia kept coming forward with hopes of getting Hogan pinned for a big shot but his aggressive approach only left him open for the big right hands from his mandatory challenger.

Hogan continued his dominant display in the 12th round, despite motivational Chants from the home town crowd to encourage the champion. It was Hogan  who got fueled by the chants and ended up pounding the champion to probably win the round.