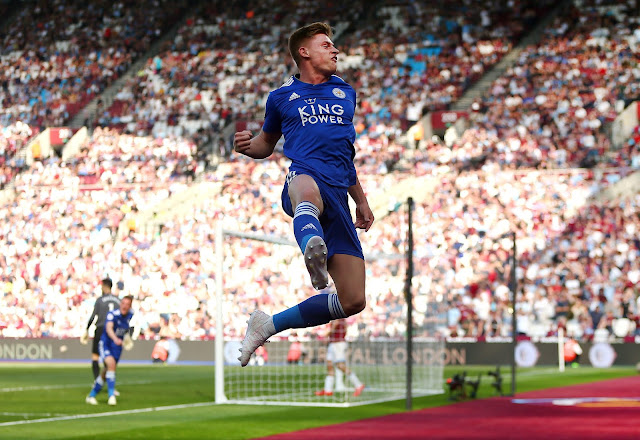 Key Moments Recap :
GOAL : 37′ Michail Antonio 1 – 0
Antonio gets his goal! He has had a busy first half and deserves that opener.
It’s a superb cross into the area from Noble on the left and Antonio rises above Chilwell to power the ball past a leaping Schmeichel.

He runs to the touchline to stroke the new claret artificial turf surrounding the pitch. Very nice it is too, just like that goal!

GOAL : 67′ 1 – 1 Jamie Vardy
Out of nothing really, Leicester are back level!
Maguire feeds Chilwell down the left-hand side and he whips a low ball into the area. Vardy is there, waiting, and is ahead of Balbuena to slot home.

Balbuena has generally done well today but that is poor positioning.

Goal : 82′ Lucas Perez 2 – 1
Obiang’s initial strike is fierce, but cannons onto the crossbar, with the rebound falling to Perez who slots home with aplomb to put West Ham back ahead.

The Leicester players are not happy at all and surround Lee Probert, calling for offside, but the goal stands. Replays show Pereira looks to have just played Perez on for that one.

GOAL : 90′ 2 – 2 Harvey Barnes
A wonderful goal from Leicester and Barnes produces a wonderful finish for his first Premier League goal.
Tielemans slips the 21-year-old through, cutting through the West Ham defence, and he hits home across the goalkeeper to surely snatch a late draw for Leicester