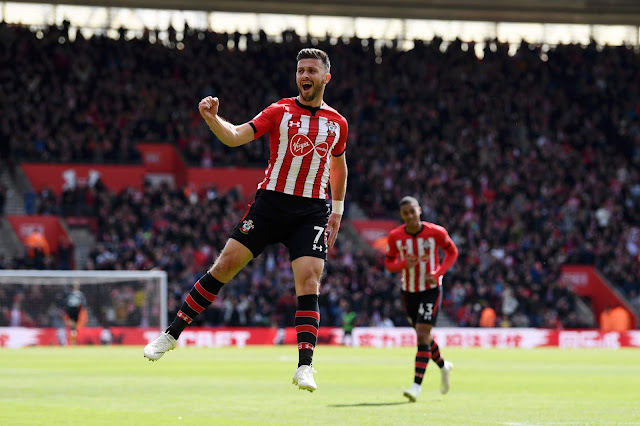 GOAL : 12′ Shane Long 1 – 0
This had definitely been coming.
Bournemouth are so open as a ball is chipped from halfway into Redmond’s path. He drives into the box and then slides across for Long, who finishes into the bottom corner with a shot from the penalty spot.

GOAL : 20′ 1 – 1 Dan Gosling
That’s how you counter, absolutely clinical from Bournemouth.
They sweep forward from inside their own half with King driving through the middle and then laying off to Wilson. He passes to Gosling on the edge of the box and he takes a touch before finishing into the bottom corner.
Bournemouth’s first shot and first touch in the penalty box, and they are level.

GOAL : 32′ 1 – 2 Callum Wilson
What a turnaround. Bournemouth were terrible in the opening 20 minutes, but now they lead.
Brooks hits a well-struck shot from 25 yards out that Gunn saves well. However, he can only palm it out into the box and Wilson follows up first and finishes from close range.

GOAL : 55′ James Ward Prowse 2 – 2
Southampton are level.
Ward-Prowse gets the ball in the middle of the Bournemouth half, holds off one challenge and then checks back and hits a low left-footed shot from around 20 yards that goes through Simpson’s legs and finds the bottom corner.

GOAL : 67′ Matt Targett 3 – 2
What a game.
And what a header from Targett to put Southampton ahead again.
Valery bursts down the right side and swings a cross to the back post where Targett leaps and plants a header across goal, with Boruc getting a slight touch that takes it away from Cook and diverts it into the net.

Goal : 86′ 3 – 3 Callum Wilson
Wowsers. The drama continues.
Bournemouth have levelled completely against the run of play. Fraser breaks down the left side, drives into the box and then crosses into the six-yard box where Wilson bundles in from close range.

Man Of The Match : Callum Wilson