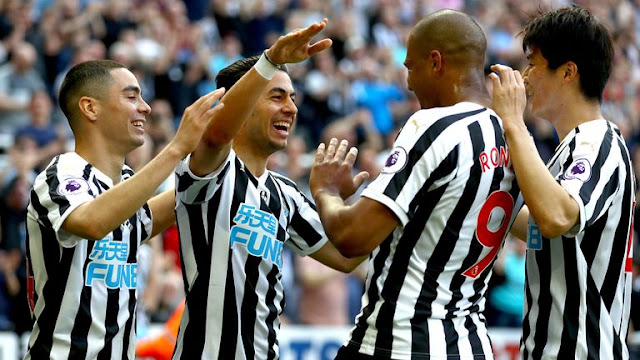 GOAL : 27‘ Ayoze Perez 1 – 0
Great finish from Perez with the first bit of real quality in the box all afternoon. Yoshida plays out from the back to Hojbjerg but Hayden slides in powerfully and directs the ball back straight into Newcastle hands.

Perez has an unmarked Rondon on his left and he looks a better option if he can squeeze the ball through two covering defenders, but instead he holds off Yoshida, who’s trying to force him wide, before nutmegging Bertrand with his shot from an angle on the right and finding the bottom far corner with an excellent strike.


Goal : 31‘ Ayoze Perez 2 – 0
Newcastle catch Southampton in possession again, Rondon does an excellent job of taking the ball down the left flank when he’s played in out wide, holding up Yoshida while waiting for support in the middle and when Perez arrives, he curls the ball across the six-yard box where he finishes past Gunn.

Goal :
Super Mario! Southampton have come out for the second half with some renewed vigour and a fine finish gets them back in the game here. Redmond looks inside off the right after exchanging passes with Ings and running from deep.

Armstrong lays the ball off for Lemina first-time, but the substitute still has work to do from 20 yards and bends the ball smack into the corner beyond a helpless Dubravka. What a way to announce your return.

Goal : 86′ Ayoze Perez 3 – 1
Perez completes a Newcastle lesson in fine finishing as he seals his first ever Premier League hat-trick somewhat fortuitously. Diame’s cross from the right is headed half away by Bednarek, but a diving header from Ritchie sends it back goalwards.
It looks like Gunn will get to it until Perez gets an all-important touch to take the ball across goal and end this as a contest – and earn him the match ball. It’s harsh on Southampton, but they just haven’t had enough in the final third.

Man Of The Match : Ayoze Perez