Skip to content
HomeSports NewsHighlights : Manchester United And Chelsea Battle To A 1 – 1 Draw 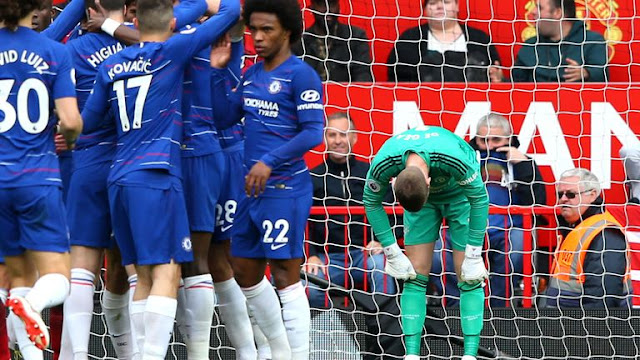 GOAL : 11′ Juan Mata 1 – 0
Manchester United have been rewarded for their excellent start!
Lukaku clips a delightful pass over the top of the Chelsea defence which picks out Shaw. The full-back pulls the ball back from the byline and it eventually falls for Mata, who has a simple finish from 12 yards.

GOAL : 43′ 1 – 1 Marcos Alonso
Chelsea are gifted a way back into the game by De Gea.
Fresh from his error against Manchester City, the Spaniard make a mess of Rudiger’s long-ranger effort.
There’s absolutely no danger as Rudiger blasts the ball goalwards from 30-odd yards but De Gea can only palm the ball down,and Alonso reacts quickest, turning the ball in off the inside of the far post.

Bailly returns to centre-back in place of Smalling, while Lukaku, Mata, Herrera and Matic come in for Darmian, Pereira, Fred and Lingard.
Chelsea make three changes themselves.
Loftus-Cheek, Emerson and the injured Christensen come out and are replaced by Kovacic, Alonso and Rudiger.