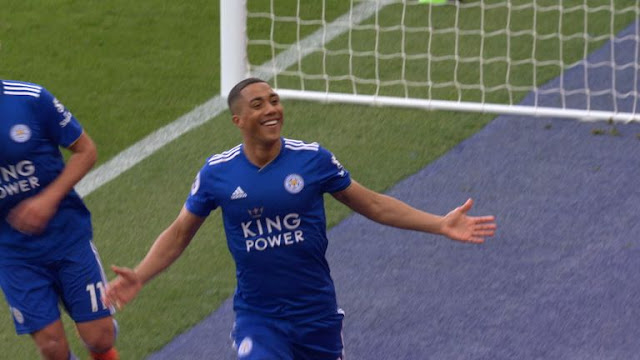 Red Card : MAITLAND-NILES SENT OFF FOR ARSENAL! He’s been walking a tightrope. Maddison gets to the ball just ahead of him and he slides in late. A needless foul. Referee Michael Oliver is on the case and draws out the second yellow. That equals a red. Arsenal in trouble.

GOAL : 59′ Youri Tielemans 1 – 0
Just as Arsenal were looking relatively comfortable, Leicester conjure up the quality required. Maddison drops into the pocket again and spots his mate’s run into the box. He ghosts in between the Arsenal centre-backs and the ball is spot on. Tielemans thumps home the header.
“Champions League, you’re having a laugh,” sing the home fans.

GOAL :86′ Jamie Vardy 2 – 0
ROUTE ONE MAKES IT 2-0! A goal kick completely opens up the Arsenal defence. Vardy races clear and lofts the ball over Leno…….the ball comes back off the crossbar but like any good striker Vardy iswaitingfor the rebound. He heads home from six yards.
That’s his eighth goal in eight games under Brendan Rodgers. Revitalised.
Arsenal are heading for their third straight defeat.

GOAL : 90′ Jamie Vardy 3 – 0
That wraps it up! Arsenal are cut open again. Ricardo dribbles his way down the right and pulls a ball across the face of goal which is tapped home by Vardy – Arsenal concede three for the third game running. Oh dear.

Man Of The Match : Youri Tielemans