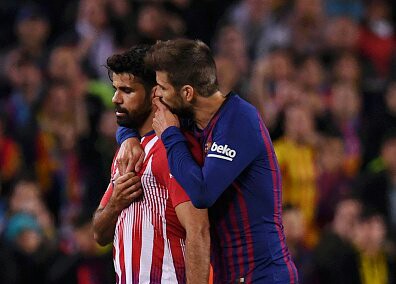 ↑ Grab this Headline Animatorr
Key Moments Recap :
Red Card : 28′ Diego Costa
Diego Costa has been shown a striaght red card! It appears he’s been sent off for something he’s said to the referee! The former Chelsea striker was right in the referee’s face before he was shown the red card. Gimenez is shown a yellow for dissent in the aftermath. It’s boiling over at the Nou Camp.

Goal 85′ 1 – 0 Luis Suarez
Barca have the breakthrough and it’s a goal that could win them the La Liga title!
Partey gives Suarez half a yard and the former Liverpool striker bends the ball beyond the dive of Oblak and into the bottom corner

Goal : 86′ 2 – 0 Lionel Messi
Game, set and match to Barcelona!
Rakitic’s pass releases Messi, who cuts inside the challenge of Gimenez before producing a reverse finish to outwit Oblak.
The noise in the Nou Camp after that strike is incredible

Preview
FC Barcelona are eight points above every team on the La Liga table and will be looking to make that twelve when they take on secind place Atletico Madrid, later today.
The Catalans have won all but one of their last six games, 4 – 4 draw with Villarreal in their last outing. Atletico on the other hand have won four of their last six games, sitting second on the La Liga table with 62 points and five above third place Real Madrid.
They will be hoping to slash their points deficit from the top to five points with a victory but against Barcelona at Camp Nou, isn’t an easy task.