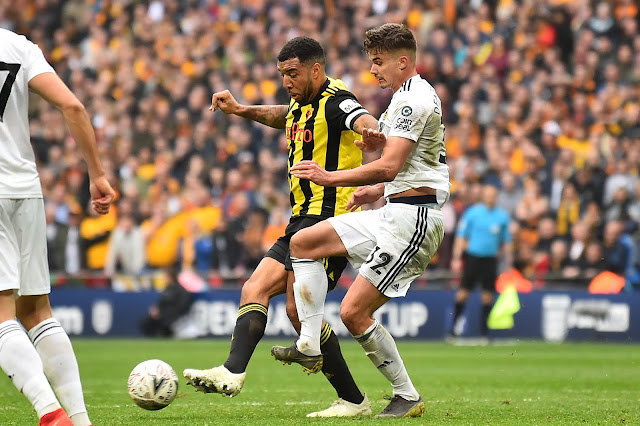 Goal : 63′ 0 – 2 Raul Jimenez
The free-kick is taken short and lifted into the box where Jimenez takes it on his chest and with his second touch crashes the ball into the back of the net.
From the replay, he looks a touch offside but VAR has a look and decides he’s just fine – and Wolves have their second of the afternoon.

Goals 79′ Gerard Deulofeu 1 – 2
GAME. ON. A Watford throw is launched towards Deeney but Saiss gets in ahead of him, before the loose ball is picked up by Deulofeu on the right.

He waits and waits for the challenge to come in before curling the ball brilliantly into the far corner from a tight angle. What a goal – and what an ending we have now.

Goals 90′ Troy Deeney ( pen)
The ice man cometh. What an ending. Deeney powers the penalty high over Ruddy’s despairing dive, and with the four minutes added on already up, we’re surely heading for another half-hour of this now.

Goal : 104′ Gerard Deulofeu 3 – 2
Forget about Traore – it’s fresh legs at the other end to worry about! Deeney win’s a flick-on in midfield to Gray, who exchanges passes with Deulofeu.

Both race towards the box before Gray releases the substitute, and he holds off Jonny before slotting calmly into the far corner and celebrating right in front of the Wolves fans.