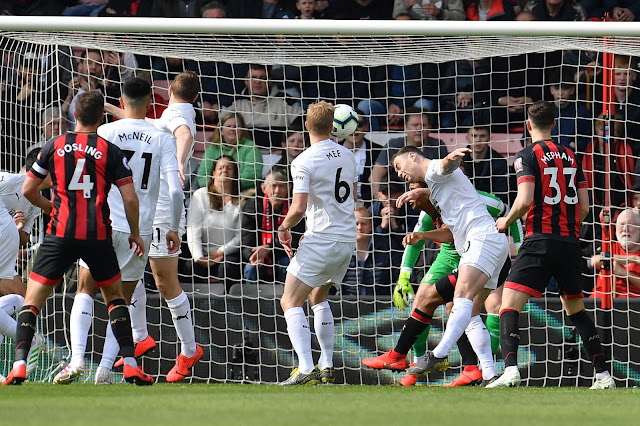 ↑ Grab this Headline Animatorr
Key Moments Recap :
Goal : 4′ Ashley Barnes (o.g.) 1 – 0
Fraser launches it in from the free-kick, Lerma flicks it on from about 15 yards out and Barnes gets above Ake and nods it in at the far post beyond Heaton’s despairing dive.It’s unfortunate for the Austrian striker, but once Ake was ahead of him he was always in trouble.

Goal : 18′ 1 – 1 Chris Wood
Begovic gifts Burnley an equaliser from the resulting corner, flapping at the cross as it comes in from Westwood, missing it altogether and leaving Wood a simple headed finish at the far post from only a couple of yards out.

Goal : 20′ 1 – 2 Ashley Westwood
What a start at the Vitality – and especially for Burnley! McNeil gets almost to the byline, crosses in low and Mepham’s scuffed clearance is going nowhere before Westwood runs onto the loose ball just inside the area and lashes it into the far corner beyond Begovic.

Goal : 65′ 1 – 3 Ashley Barnes
Embarrassing doesn’t cover it. Bournemouth are masters of their own downfall and fall two behind.
First off, they think the ball has gone out for a throw-in, there’s no flag and Burnley keep playing. Taylor crosses from the left, Begovic drops his cross under pressure at the near post from Wood, and Barnes fires in the loose ball with Bournemouth already protesting.

Man Of The Match : Ashley Barnes 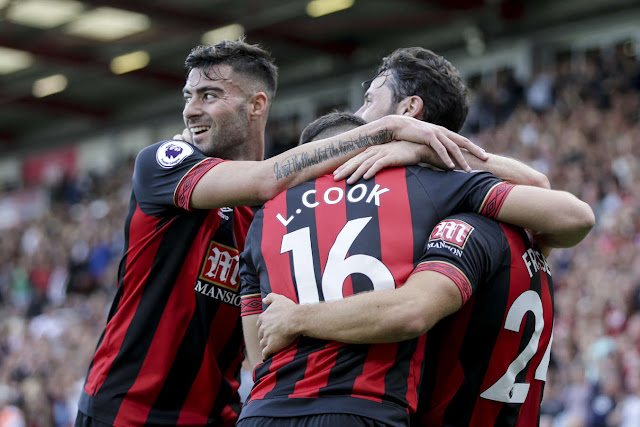 Burnley FC is taking their survival fight to the Vitality Stadium, where Eddie Howe and his team will be hoping to fight their was into the top ten on the league table.

Bounemouth will be without, Defender Steve Cook (groin), along with long-term absentees Andrew Surman (calf) Simon Francis and Lewis Cook (both knee) will be missing.

Burnley will only be without Peter Crouch, as Winger Junior Stanislas and midfielder Dan Gosling should both be available having returned for the defeat at Leicester