Skip to content
HomeSports NewsHighlights : Arsenal Lose 2 – 3 To Crystal Palace At The Emirates 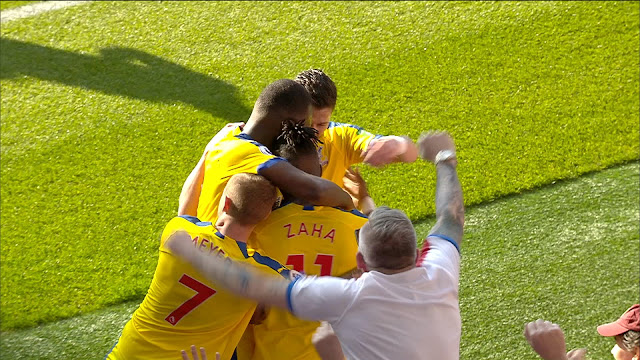 No surprises the route…it’s from a set-piece. Arsenal are all over the place. It’s a fantastic delivery from the right but Benteke is unmarked, eight yards from goal and has the simplest of tasks to head home.

GOAL : 47′ Mesut Ozil 1 – 1
Now that’s what I call a response. Arsenal carve open Palace down the left. One of the subs, Iwobi, is involved. He feeds Lacazette, who spots the run of Ozil down the inside left of the box. The German glides into a shooting position and flicks an effort past Guaita at his near post! The Emirates comes to life!

GOAL : 61′ 1 – 2 Wilfried Zaha
Benteke wins a flick on but Mustafi looks in control of the situation. However, he thinks Leno is coming to mop up but he’s too far out for that. Zaha is lurking behind him and accelerates through on goal. It’s not the greatest finish but it squirms through Leno.

GOAL : 69′ 1 – 3 James McArthur
Arsenal’s defence is crumbling…Palace punish them again! No surprises of the route again: it’s a set-piece.
A corner from the right is won by Dann for the 2,000th time this afternoon. His header flies across goal and McArthur follows it in before heading home from close range. He was in so much space he looked offside…nope he was level. Just horrendous defending.

GOAL : 77′ Pierre-Emerick Auba… 2 – 3
Out of nothing, there is life in Arsenal. All made by Aubameyang. He dances past three tackles off the right but gets blocked out of things. He earns his bit of luck though as the ball bounces to him about 18 yards out and he fires it low into the corner. He now draws level on the top of the Golden Boot race.
Can Arsenal find another…?