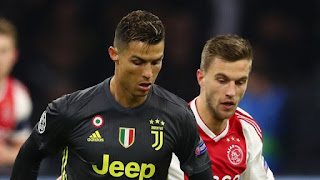 125 not out for Cristiano Ronaldo! Juventus take a harsh, harsh lead to put Ajax to the sword. It’s a fine goal but a dreadful one for Ajax to concede, with Ronaldo starting the move in midfield and passing over to Cancelo on the right.
The defender gets forward and whips the ball into the box, where Ronaldo has ghosted in between the two centre-backs and has acres of space to head past Onana for the opener.

Goal : 46′ David Neres 1 – 1
What a start to the second half! 29 seconds on the clock when Ajax level the scores – and it’s seven in eight now for Neres, but surely none better than this.
Ajax hold possession from kick-off, playing it around their back line and back to Onana, who looks out onto the left channel where Cancelo intercepts. But a heavy first touch sees him caught in possession, and he’s never catching Neres once he races away. The Brazilian cuts inside, checks onto his right and bends an unstoppable shot past Szczesny.