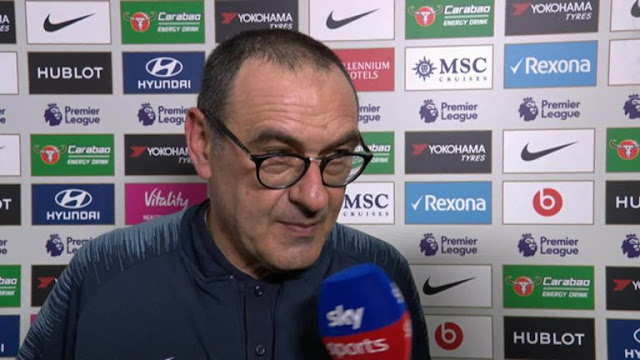 Eden Hazard has been Chelsea’s key player for a while now and yesterday produced an excellent performance that not only shows, why he is been targeted by a club as Real Madrid but a brace that fired Chelsea into the third spot of the Premier League Table.

Eden Hazard has expressed and has never been shy about his desire to join the Spanish giants Real Madrid and the club expressed last week, their interest in the Belgian. This puts Chelsea in a fight to keep him.

Chelsea Boss Maurizio Sarri also admitted that it will be difficult to keep him especially, if he wants to get another experience. He said he doesn’t believe £100m will be enough to keep him but the board will try persuading him.

“[£100m] is too cheap, in this market it’s too cheap. We have seen in the last market window every price I think. So I think it is really very hard to change Hazard with another player.”

“I cannot do anything [to keep him], because the club agrees with me, but if Eden wants to make another experience, it is very difficult to keep him, I think.

“[We will try to persuade him] that we are trying to improve, to become one of the best teams in England, and as a consequence in Europe, but I think I have to respect his decision.”

Eden Hazard pulled off a great performance against West Ham and his opener might end up a goal if the season contender. He picked the ball up from deep  took out three defenders before scoring. This made the West Ham fans chant “He Is Off To Madrid”

After the game the Belgian told Skysports, he was still focused on his Chelsea career till the end of the season.

“They are wrong. I’m just focused with Chelsea until the end of the season. I just want to finish in the top four and win the Europa League. We still have a lot to do, and then we will see.

“Now we are in a good momentum. We’ve won three in a row and for the mentality it’s good to keep going like that. Top four is our target, winning the Europa League is our challenge, so we have to keep fighting on both fronts. We can do it.”