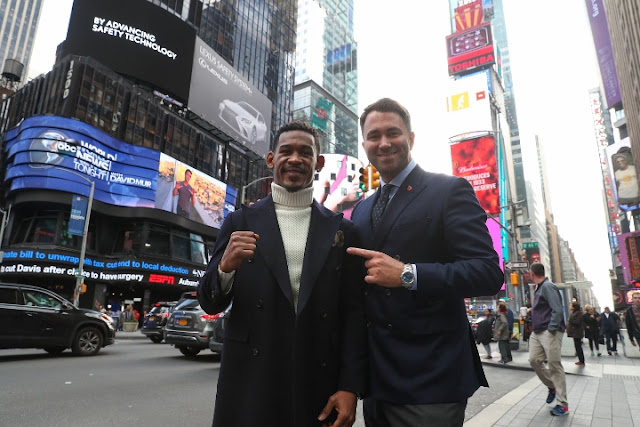 ↑ Grab this Headline Animator
IBF middleweight Champion Daniel Jacobs will be facing a tough task in a unification fight with WBC and WBA middleweight champion Canelo Alvarez, when they meet at the T-Mobile Arena in Las Vegas on May 4th.
Daniel Jacobs has been known as a fighter not only in the sport but also, as a survivor  of a form of bone cancer. He returned after 19 months and still dished out great performances.
Jacobs is clearly happy for the opportunity, maintaining that he can defeat Canelo and seems to be enjoying training camp

“This is the opportunity I’ve been waiting for. The opportunity to achieve greatness within the ring. It’s been an excellent training camp, I’m sure I can beat Canelo to establish myself as the best middleweight in the world, ” stressed Jacobs.

This positivity is also been shared by his promoter Eddie Hearn, who also strongly believes Jacobs will be the winner when they share the ring. He also believes that Canelo will be bringing all his fan base with him to the fight.

“I believe so. Canelo has got the power of the sport behind him if you like. You know, but Daniel Jacobs, now this is his moment and he really believes he’s going to win; we believe he’s going to win,” Hearn told Sporting News.

“I think it’s going to be a brilliant fight. Yeah, unification fight in the middleweight division. I think there is a lot of support for Daniel Jacobs, obviously Canelo has a huge fan base as well, but we really believe that Daniel Jacobs can win the fight on May 4.”