Dina Thorslund Vs April Adams In Horsens On June 22nd 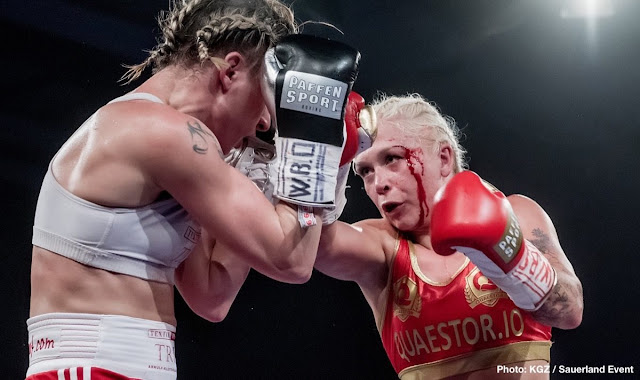 ↑ Grab this Headline Animator
WBO Women’s WORLD Super Bantamweight Champion Dina Thorslund (13-0, 6 KOs) will defend her title against mandatory challenger April ‘Armageddon’ Adams (11-1-1, 4 KOs) at the at the Forum Horsens in Denmark on June 22.
Thorslund is coming off a bloody Unanimous Decision win over Alesia Graf on January 19 at the Struer Energi Park, where she retained her title despite suffering a cut on the left eye.
She will be putting her world title on the line against WBO Asia Pacific Champion April Adams, who is also on a seven fight winning streak and coupled with confidence, believes she could dethrone the world champion in her hometown Denmark.

Enter your email address:
Delivered by FeedBurner
Championship boxing will be making its way back to Horsens for the first time since 2007 and Thorslund is banking on the hometown fans to turn up, not just for her but for their boxing heritage.
Dina Thorslund
“I’m looking forward to fighting in Horsens,” said Thorslund. “I know it’s a city with lots of boxing history, so I’m sure people are going to ready for some world class boxing on June 22. There will be a lot of fans travelling from my home town Struer to support me, and together with the local fans, I’m sure they’re going to create an amazing atmosphere.
“Adams is a strong boxer, who’s in good shape, so I think it will be a very physical battle. She’s tough as nails, but not tougher than me. I will be 100% prepared for this fight, and will show the best version of me in front of the fans at the Forum Horsens. I will show why I’m World Champion, and Adams isn’t.”
April Adams
“This is an opportunity that every fighter aspires towards yet very few get,” said Adams. “It has been a goal of mine from before I even started boxing. I have always wanted to be World Champion, and I feel very privileged to get the chance to see that goal unfold.
“I think Thorslund is a very strong fighter. She is a World Champion for a reason, but I back myself. I back the sacrifices I’ve made and the hard work I have put in. I owe it to my team and supporters, who have been behind me on this journey, to win this fight, and on June 22, the belt will have a new home.”