Dillian Whyte Vs Oscar Rivas At The O2 Arena, July 20 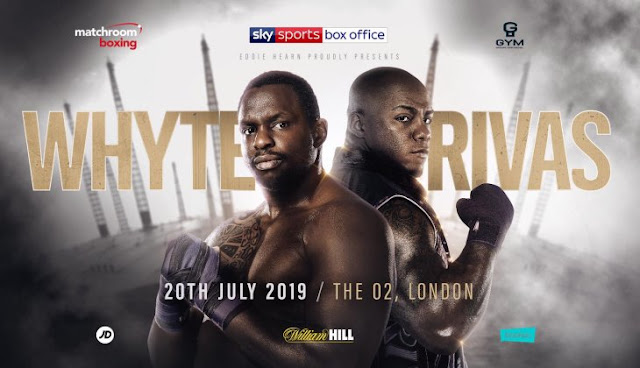 Heavyweight contender Dillian Whyte will take up a massive risk opponent in hard hitting Columbian Oscar Rivas for the number one Heavyweight spot in the WBC at The O2 in London on Saturday July 20, live on Sky Sports Box Office.

Whyte (25-1 18KOs), also called the “Body Snatcher” is placing his hard earned No, 1 spot on the line against Oscar Rivas, after just recently defending that spot successfully against Dereck “Del Boy” Chisora with an 11th round knockout back in December.

Since his lone loss to Unified Heavyweight Champion Anthony Joshua back in 2012, Whyte has hacked up nine straight victories, with notable wins against Joseph Parker, Robert Helenius and Lucas Browne coupled with two wins against Dereck Chisora.

“I am very happy to be fighting again at The O2 in July,” said Whyte. “Oscar Rivas is undefeated and ranked in the top 10 across the board of all the governing bodies. He has been one of the most avoided heavyweight fighters in the last few years.
“His KO victory over Bryant Jennings sent shockwaves through the division and Tyson Fury just turned down ESPN/Top Rank’s offer to fight him. I am over the moon that he has accepted the fight. He has a great amateur and professional record, including a win over Kubrat Pulev.
“I am more than happy to carry on fighting top 10 fighters like Rivas until I get my well-earned shot at Deontay Wilder or Anthony Joshua.
“I can’t wait until July 20 to fight again at The O2 which is one of the best venues in the world for boxing.”

Delivered by FeedBurnerOscar “Kaboom” Rivas (26-0 18KOs) is a very dangerous opponent for Whyte and will be coming into the fight on the vacant of other biggest victory of career. He knocked out former World title challenger Bryant Jennings in the last round of the fight at the Turning Stone Resort Casino in Verona, NY in January. He is ranked ten with the WBC, seven in the IBF and a lofty five with both the WBA and WBO.

Rivas has a highly decorated amateur record and boast wins over Kubrat Pulev in the 2008 Olympic Games a year after landing silver in the Pan-American games. Having an explosive style, Rivas and Whyte will definitely be filled with fireworks come July 20th.

‘‘I have waited for this opportunity for a very long time,” said Rivas. “Dillian Whyte is an excellent boxer, a World class fighter and the number one contender. He deserve all my respect for his accomplishments and I am grateful for the opportunity he is giving me.
“This is exactly the kind of challenge I was hoping to get. I am undefeated, I am planning to keep my perfect record after July 20 in my quest to get the ultimate opportunity to become World champion.”