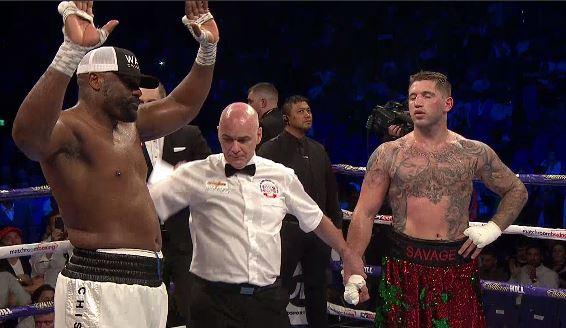 The British Heavyweight was the aggressor throughout the first eight rounds, followed Gashi everywhere in the ring. Gashi fought mostly on the back foot and never appeared to have Chisora in trouble.

The first round was cagey while the second round was more of Chisora trying to pin down an opponent, who seemed afraid of engaging and by the third round all Gashi had was a few counters.

Chisora had his Jab function well and made sure Gashi continued in reverse, while he landed big right hands, hooks and body shots by the fifth round Gashi had looks of concern all over him. He had failed to land a significant shot and his opponent was running away on the cards.

The Finchley man followed his opponent around, hoping for a trade but that didn’t happen. He kept his jab busy and was clearly going to win by the seventh round, as Gashi gave no response and resistance to his attacks.

The fight exploded in the eight, as Gashi finally gave out a couple of meaningful punches but Chisora took them well, also landing his hooks as compliments. More if the same in the ninth, Gashi landed a big left but that also didn’t trouble Chisora  who had been out looking for such from the opening bell.

Gashi finally gave up all hope in the 10th,, just doing enough to stay till the final bell. Chisora though wanted a last minute knock out but Gashi made him miss his trademark hook.