Danny Garcia Drops And Stops Adrian Granados In The 7th Round 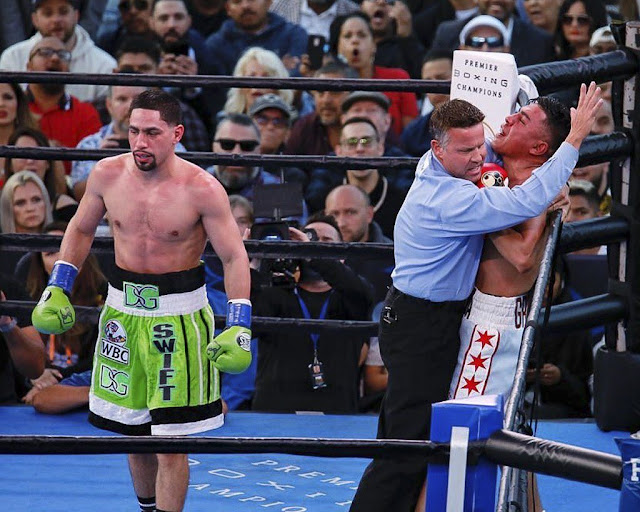 Danny Garcia made a big Welterweight statement with the battering, dropping and stopping the always brawling Adrian Granados in the main event on Saturday night in a PBC on FOX card at Dignity Health Sports Park.

Danny “swift” Garcia brought back his prime days in the second round, where he dropped Adrian Granados twice on the second round, first with a devastating left hook and later a thunderous right hand. He then knocked him down again in the fifth round.

Delivered by FeedBurnerGarcia started the first round in style and even landed thunderous left hook to draw a reaction from the crowd but got tagged with some shot in the opening round before setting the tone for the fight.

“I’ve said it before, when Danny Garcia is at his best, nobody can beat him,” said Garcia, who improved his record to 35-2 with 21 knockouts. “I had gotten a little comfortable in the past, but I put my 110 percent into this fight, and when I do, I beat everyone.”

“I hope I didn’t scare Manny Pacquiao away,” Garcia added. “I’d love a rematch with Shawn Porter or Keith Thurman, or a fight with Errol Spence Jr. I’m back.”

The statement made by Garcia will ring loud in the now so competitive Welterweight division and will set him up for various options but Granados will need to settle with the gatekeeper tag or get back to the drawing board.

Garcia, who joined the league (Shawn Porter and Adrien Broner) of those to hand Granados notable loses  was fighting in southern California for the first time and said he will definitely consider fighting Top Rank Pound for Pound star and Wbo welterweight Champion Terence Crawford.