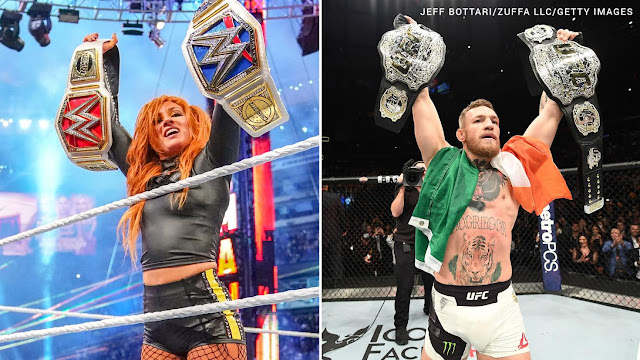 Conor McGregor spent some time from his controversial schedule to congratulate Becky Lynch on her ground breaking, history setting achievement at the Wrestlemania 35.

For UFC two division champion Conor McGregor, who was also the first UFC double champ or Champ Champ, as he calls it  was the first to welcome “The Man” into the Club

Conor McGregor also gave some appreciation to “The Baddest Woman On The Planet” Ronda Rousey and The Queen Charlotte Flair for their wonderful performance in the WWE Show Of Show historic “winner takes all match”.

Conor McGregor, who is presently rapped up in his numerous lawsuits and suspensions also gave some hint on a possible switch to the Wrestling shiwbiz.