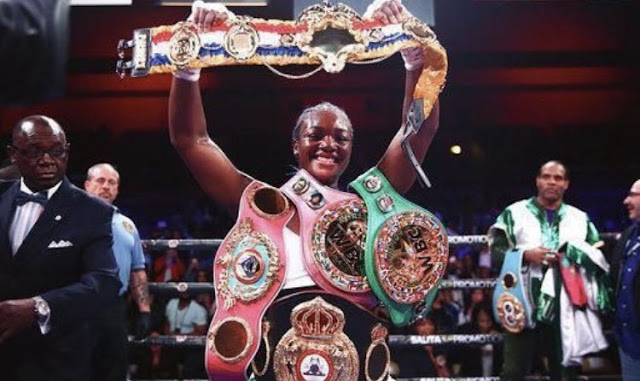 Sheilds made use of her speed and power to force the formerly unbeatun champion to a near knockout in the eight round but failed to finish her off, ending up with a Unanimous Decision.

She dominated Hammer so well, all three judges Lynne Carter, Guido Cavalleri and Robin Taylor scored the fight eight out of ten rounds in her favor.

Claressa Shields now joins Welterweight World Champion Cecilia Braekhus, as the only women to unify all four world titles (IBF WBA, WBC and WBO) in a particular division. Shields improves to Shields (9-0, 2 KOs) while Christina Hammer lost for the first time in her pro career and drops to (24-1, 11 KOs, 1 NC).

“Well, first of all, I can say I am the greatest woman of all time,” Shields told Showtime’s Steve Farhood in the ring. “Give me that! Give me that! Y’all told me I couldn’t do it. Y’all said she was 24-0, 11 knockouts. Ain’t no way Claressa will beat her. She 8-0, two knockouts. Claressa’s gonna get knocked out. Claressa don’t hit hard. Come on.”

“I knew I could hurt her,” Shields said. “It was times when I hurt her and I was like, ‘You know what? I don’t wanna finish it yet. Hold on.’ I thought I finished her in round eight. I thought I saw a white towel come in the ring. That’s when I was like, ‘Oh, sh*t! We got a knockout.’ But I thought the fight should’ve been stopped. She was holding on to me, pushing off me. She held me excessively. You know? But I just told myself, ‘Stay cool, stay calm.’ … I wanted to be the first one to get her out of there. I did everything I wanted to do. They said 98 to 92. Give me 100 to 90. Give me my credit. I beat her every round.”

The fight started out with the two fighters showing respect for one another but Shields was able to use her speed and power to outclass and overcome the more experienced Hammer, who worked behind her Jab.

By the eight round, it was all a one Sided affair. Shields drilled Hammer with power punches early in the eight round and continued a vicious assault right up until the bell sounded to end that round. Hammer only did her best not to get caught with a knockout punch during the round.


Shields almost thought she had won by Knockout, when referee Sparkle Lee stepped in for the end if Round stoppage. 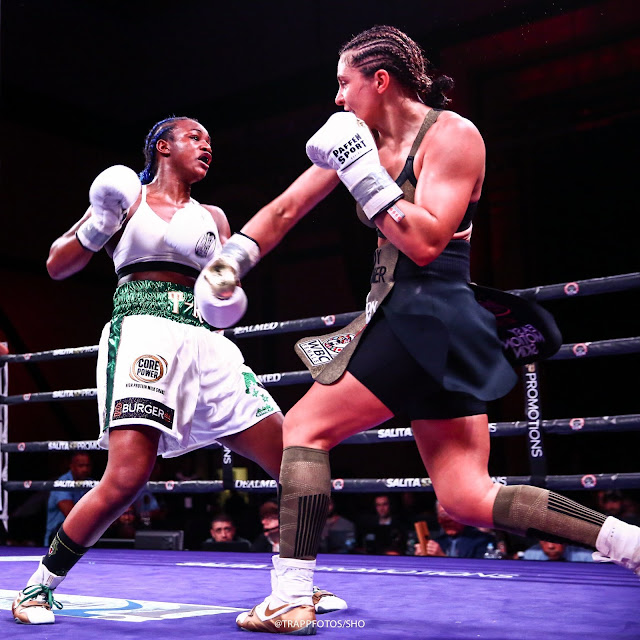 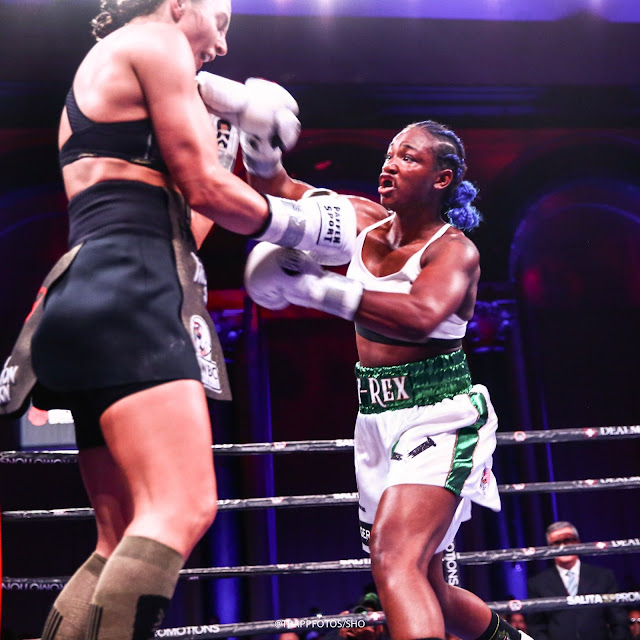