Adrian Granados Needs To KO Danny Garcia Or Dominate Him 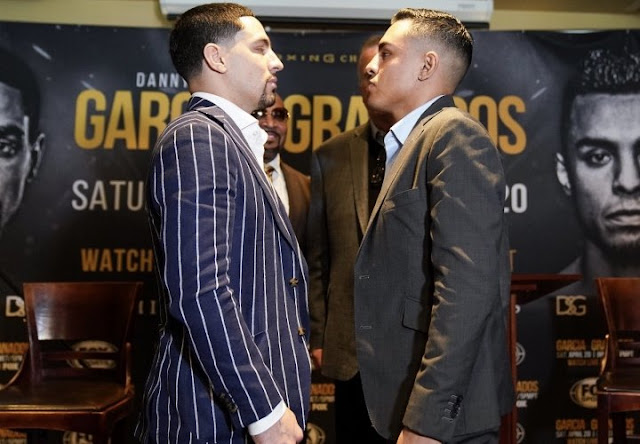 Adrian Granados will face Danny Garcia in a Welterweight bout that will headline a Premier Boxing Champions on Fox card from Dignity Health Sports Park in Carson, California.

Despite the respect he has for thh former WBC Welterweight Champion Garcia and his Knockout power he believes he will need to frustrate and knock him out to win the bout.

“There are a lot of fights where (Garcia is) losing the whole fight, and he just has that one-punch power that will change it all,” Granados said at his recent media workout in Los Angeles. “So I’m definitely going to respect that.”

Granados believes that allowing the fight get to the score cards might not be easy good idea, as the former world champion always has a way of getting favored.

“I think I got more dog than (Garcia) does,” Granados said. “I’ve watched enough fights now and I see he complains a lot and kind of gets away with a lot, and he does what he gotta do to win, but I never had anything handed to me.

“I do feel like I need a stoppage or a dominating win, like I need a one-sided fight because I already know I got the record where I’ve gotten a lot of controversial losses. If it’s close, I definitely know I won’t get the nod.”

Granados has a slug it out style that has earned him a reputation among the boxing fans but didn’t guarantee him victories against Adrien Broner and Shawn Porter. He is finally tired of pleasing  the boxing fans and will do anything to win a fight in his quest for a world title.