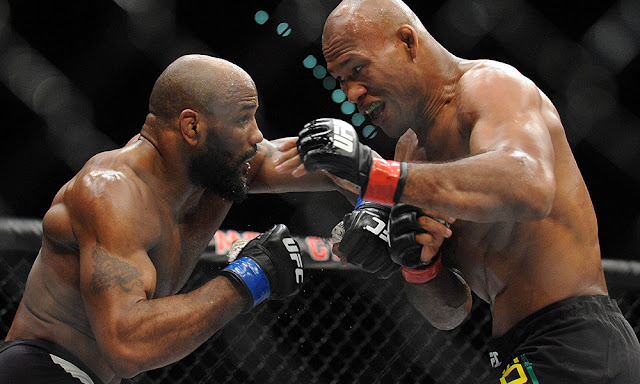 ↑ Grab this Headline Animator
The Rematch between Yoel Romero (13-3 MMA, 9-2 UFC) and Ronaldo Souza (26-6 MMA, 9-3 UFC) has now been elevated to the Main – Event of the Upcoming UFC on ESPN 3.
Yoel Romero was initially scheduled to face Paulo Costa (12-0 MMA, 4-0 UFC) on the same card but with the new development the No. 2 rated Romero will now headline the event which comes up on April 27 at BB&T Center in Sunrise, Fla. Live on ESPN after Prelims on ESPN+.
Romero and Souza rematch hash bee in the making for a while now, with injuries always keeping the fight from happening, first it was scheduled for UFC 230 and then UFC on ESPN+1. In their first meeting, Romero took home a split decision win over Souza at UFC 194.

Delivered by FeedBurnerRomero in his last three fights has lost two split decisions to Robert Whittaker and in between a third round KO win over Luke Rockhold.

Souza on the other hand, is coming off a “Fight of the Night” knockout performance  over former middleweight champion Chris Weidman at UFC 230 and before then a split decision loss to Kelvin Gastelum at UFC 224 in Brazil, which also won “Fight Of The Night”