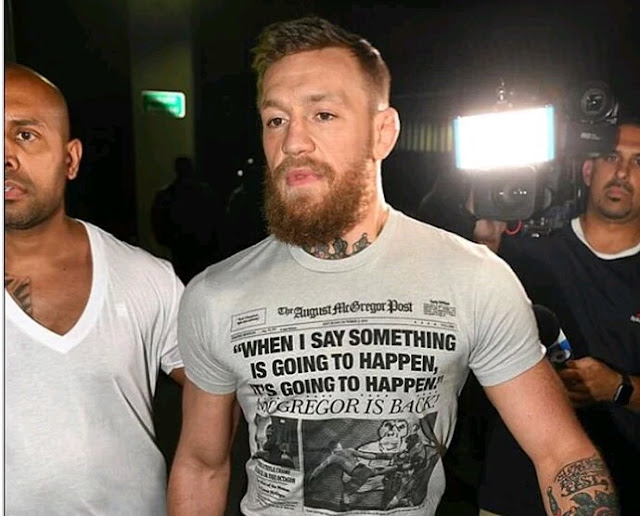 ↑ Grab this Headline Animator
Conor McGregor was arrested in South Florida for his actions after a 22 Year old fan attempted to take a picture with him.
McGregor reportedly slipped the phone pout on his hand and stomped on it several times before leaving the scene with the phone. According to the Miami Police, he is facing charges of strong-arm robbery and criminal mischief.

Delivered by FeedBurnerThe incident took place at The Fontainebleau Miami Beach hotel, 5am and the fighter has now been released after paying $12,500 bail.

“Last evening Conor McGregor was involved in a minor altercation involving a cellphone that resulted in a call to law enforcement”. His attorney, Samuel J. Rabin Jr., said in a statement
“Mr McGregor appreciates the response of law enforcement and pledges his full co-operation.”

Conor McGregor is  already serving a six month ban by the NSAC, for his part in the UFC 229 post Fight brawl. He has recently been in Florida for preparations ahead if his comeback.

In his last fight, McGregor lost to Khabib Nurmagomedov via fourth round submission and before then lost a boxing fight against Floyd Mayweather in August 2017.