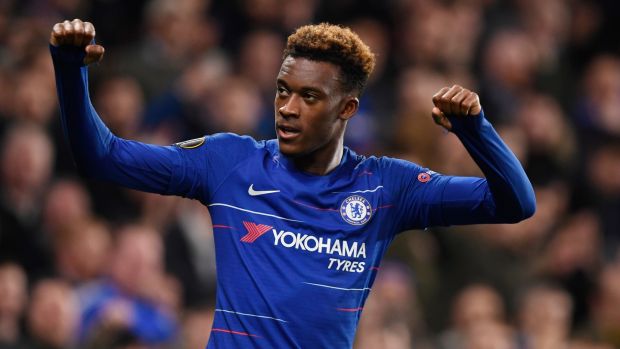 ↑ Grab this Headline Animator
UEFA has kicked off investigation on the reported Racist Abuse on Chelsea’s Callum Hudson-Odoi in Chelsea’s UEFA Europa League tie at Dynamo Kiev.
The game ended 5 – 0 in favor of the English side, which saw Chelsea FC proceed confident into the Quarter Finals of the competition.
The Club reported the Incident, claiming one of their players was racially abused by the Dynamo Kyiv supporters during the second leg clash in Ukraine.
A set of Dynana Kiev fans were reported making Monkey chants at the 18 year old during the last two minutes of the Match and this was brought to the attention of the referee by team-mate Cesar Azpilicueta.

Delivered by FeedBurnerThe Club’s captain made sure the referee Tobias Stieler had full knowledge of the incident and from then on , chairman Bruce Buck and club secretary David Barnard had it fed to the UEFA match delegate

“We can confirm a report of racist abuse directed at one of our players in the final minutes of the match in Kiev from a small section of home supporters. We wholeheartedly condemn such abhorrent behaviour,” a Chelsea statement read.
“The matter was reported to the referee at the final whistle and the chairman and club secretary spoke to the UEFA match delegate immediately after the match. We expect UEFA to conduct a fulsome investigation and we will provide full cooperation.”