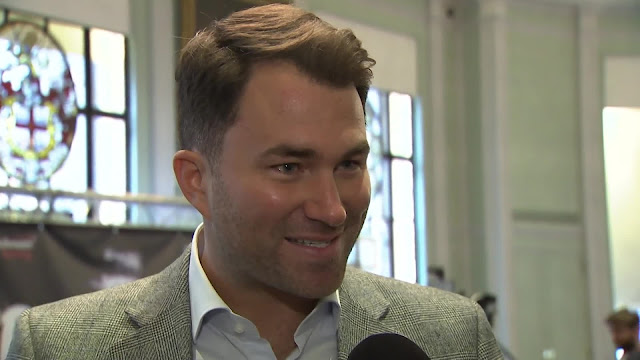 ↑ Grab this Headline Animator
MatchRoom Boxing boss Eddie Hearn has criticized the idea of Tyson Fury facing Tom Schwarz in his return to the ring, after just recently challenging Deontay Wilder for the WBC championship.
Tyson Fury is set to face German contender Tom Schwarz on June 15th, in his first fight in Las Vegas, Nevada.
Tyson Fury dominated WBC Heavyweight World Champion Deontay Wilder in his last outing but had to settle for a controversial draw after almost getting knocked out in the Ninth and Final round respectively.

Tyson Fury was close to making an agreement for a Rematch with the WBC champion but opted to deal with Top Rank and US broadcaster ESPN, slowing down the Wilder rematch.

The move was seen by Eddie Hearn as “Dreadful”, as everyone believed he wold be going for a bigger fight after sharing the ring with Deontay Wilder or even settle for a Rematch with the American.

“It’s a dreadful fight. You’ve just fought Deontay Wilder, you’ve basically beat Deontay Wilder – I know it was close but most people had him winning the fight. They’ve ordered a rematch, pulled out of the rematch, and now you’re fighting Tom Schwarz,” Hearn told IFL TV.

“If Anthony Joshua did that, what do you think the reaction would be? But I don’t blame Tyson Fury. He’s been given a load of money to have an easy touch, no problem.

“I just feel that AJ gets a lot of unfair criticism in terms of his resume, and who he’s fighting, and then Fury goes and fights Tom Schwarz. No disrespect to Tom Schwarz, but he’s not even top 15 in the world.”