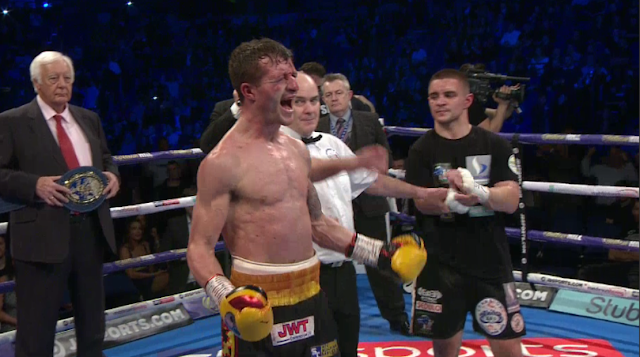 ↑ Grab this Headline Animator
Robbie Davies won a disputed decision over Joe Hughes in his British Super lightweight title defense  allowing winning the EBU super lightweight title in the undercard of Liam Smith Vs Sam Eggington on Saturday.
Both fighters gave the fans a dream opening to the main card, as both fighters fought themselves out. Landing their best shots switch-hitting Davies landing a number of sharp jabs  while Davies bloodied him with his left hook.
Hughes got gradually into the fight and enjoyed great success in the fourth round, he attacked Davies with body shots, pressuring him up, bobbing and weaving while throwing wicked left hooks at the local man.

Davis was outworked by Hughes, marking up his face in the mid rounds, controlling the pace of the fight though Davies did his bit but it was Hughes, who controlled the fight..