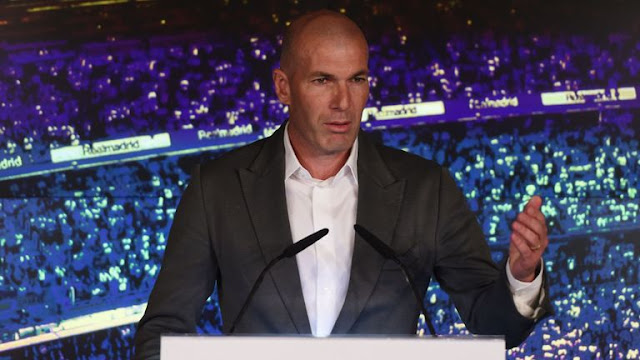 ↑ Grab this Headline Animator
Zinedine Zidane has made a surprising return to Coaching Real Madrid, less than a year after leaving the role. The Club confirmed the Frenchman will be replacing the sacked Santiago Solari at the Santiago Bernebeu.
Zidane left Real Madrid in the summer after winning nine trophies including the UEFA Champions League in three straight seasons and in his return signed a contract that leaves him with the Spanish giants till 2022.
After Zidane’s departure, Real Madrid hired Julen Lopetegui who got Sacked in November and replaced by Santiago Solari but, he also has also had a rough short term at the club, with Real Madrid sitting third on the LA Liga standings, five points behind local rivals Atletico Madrid and twelve behind FC Barcelona on top of the table.
In a statement released on Monday, Real Madrid terminated the appointment of Santiago Solari and announced the return of Zinedine Zidane.

“The Board of Directors of Real Madrid, meeting today, Monday, March 11, 2019, has decided to terminate the contract that linked Santiago Solari with the club as coach of the first team.
“Real Madrid appreciates the work done by Santiago Solari and the commitment and loyalty he has always shown.
“The Board of Directors has also agreed the appointment of Zinedine Zidane as the new coach of Real Madrid with immediate incorporation for the remainder of the season and the next three, until June 30, 2022.
“The president of Real Madrid will appear today with Zinedine Zidane before the media at 8:00 pm in the press room of the Santiago Bernabeu Stadium.”

Delivered by FeedBurnerZidane, before his departure Win 71 percent of his La Liga matches incharge and in the Champions League, 67 percent.
Winning all the games in the Club World Cup, the Super Cup and Spanish Super Cup.

He is rejoining the Club their humiliating 4 – 1 defeat by Ajax in the UEFA Champions League Round Of 16 second leg on Tuesday  which kicked them out of the competition, they dominated three previous seasons ago.

Zinedine Zidane said in his Speech

“I’m very happy to be home,” said Zinedine Zidane.
“I want to put this club to back where it belongs – and now, back to work tomorrow.
“When I left the club it was because I needed to leave the club. I think the players needed it because they had won everything. They had won every title.
“Change was needed at that time. Now I have chosen to return because the president called me. I’m very fond of the president… and I’m here again.
“I played here, I defended this shirt. I’m someone who works for this club and now I’m not going to forget what we have won, but there are also things that I didn’t do well.
“Last season, for example, we were out of the league title race early on.
“I carry a love inside for this club that nobody can take away.
“I am buzzing.”

Before this announcement, Jose Mourinho had been the front runner for the Job and was even heard in the mouths of Madrid Fans after their UEFA Champions League exit.