↑ Grab this Headline Animator
Key Moments Recap :
Goal : 0 – 1 Romelu Lukaku
PSG are knocking it about the back nonchalantly… Kehrer square pass for Silva is underhit and the centre-half is sleeping. Lukaku steals in, is through on goal, has a heavy first touch but manages to round the goalkeeper.
It looks to be heading mout of play, but Lukaku has to slide in to squeeze the goal home from the tightest of angles

Goal : Juan Bernat 1 – 1
Bailly plays Mbappe onside as he receives a ball on the right of the box, and Bailly is sleeping at the back post again as Bernat evades him to tap home Mbappe’s fine ball across the face of goal.

Goal : 1 – 2 Romelu Lukaku
Rashford, who hasn’t had the best five minutes, has a go from 25 yards. It’s dipping but should be easy for Buffon.
But NO! Buffon spills it into Lukaku’s path, and the Belgian turns home with ease for 2-1 on the night, and 3-2 on aggregate

Man Of The Match : Marcus Rashford.

Manchester United will face a tough tasktof overturning a two goal deficit they incurred in the first leg of their UEFA Champions League round of 16 clash at Old Trafford, thanks for two goals from Kimbepe and Kylian Mbappe.

The two goal deficit isn’t the only problems Manchester United is facing. They have a truck load of injuries that might see them miss 10 first team players including Paul Pogba,, who is suspended for his Red card in the first leg.

PSG on the other hand, have had a 100% percent record in their last six games including their win over Manchester United at Old Trafford, which will be their primary source of confidence when United visits the Parc de Princes. 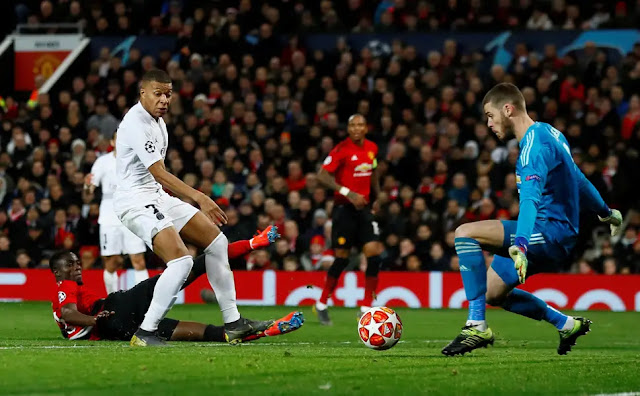 PSG will still be without Neymar Jr in the second leg due to metatarsal injury, Edinson Cavani might return after missing the first leg. PSG coach Thomas Tuchel will have many tactical options, among which might be the compact system he employed at Old Trafford.