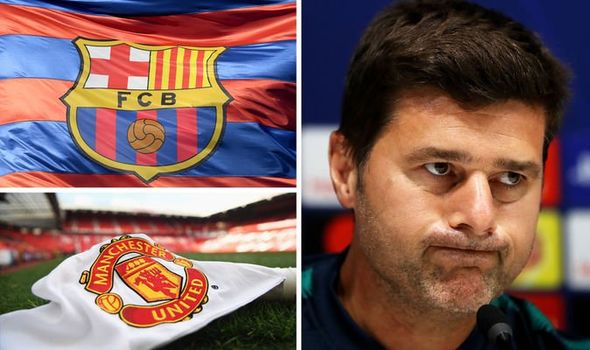 ↑ Grab this Headline Animator
Manchester United will face a big task of defeating FC Barcelona over two legs, if they are to continue their UEFA Champions League dreams this season.
A feet they have failed to achieve in their last two meetings with the Catalan giants and this is viewed by Tottenham Hotspur manager Mauricio Pochetino as unachievable, even this time.
He admits that Manchester United have the potential to win big but believes that FC Barcelona will definitely make it through to the Semi Finals because he sees them a step ahead of his Premier League rivals

“I think the Manchester United team have been built during the past few years to win big things,” Pochettino said, when asked to comment on the tie. “But winning important competitions such as the Champions League or the Premier League always depends on small details.

“Of course they have the players that are capable of making things difficult for Barcelona. But I think Barcelona are one step higher than Manchester United.”

Delivered by FeedBurnerThe Argentine, whose side got paired with league rivals Manchester City for the last eight of the competition also believes only FC Barcelona can be seen as favorites to win the competition.

“If there is a favourite team to win the Champions League, it is Barcelona” he added.

“[Barcelona manager] Ernesto Valverde is doing a great job. Then they have players of an extraordinary level. And then they have Leo Messi. Then you have teams such as Manchester City or Juventus that will always have chances to win the competition because they are teams designed to do that.”

Manchester United parted ways with Jose Mourinho in December, replacing with interim boss Ole Gunnar Solskjaer with pending links to Pochetino and Juventus Boss Juventus coach Massimiliano Allegri but both seemed ruled out of the equation after Solskjaer took Manchester United a step higher than expected and made hiselfh the favorite for the permanent job.