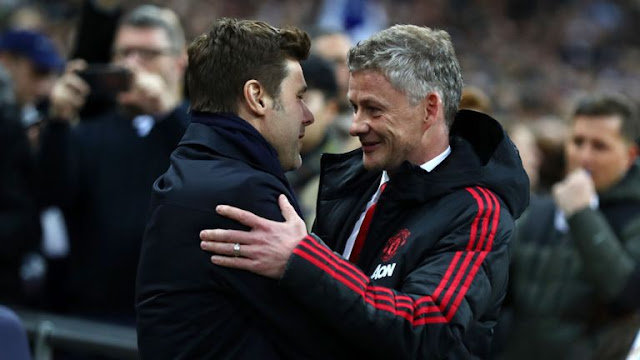 ↑ Grab this Headline Animator
Tottenham Hotspur Manager Mauricio Pochetino has give Ole Gunnar Solskjaer a congratulatory message for securing the Job at Old Trafford.
Pochetino had been among the list of managers lined up to replace Jose Mourinho, after his dismissal in December but the Argentine claims, it was all nothing but speculation.
Despite the huge lists of possible candidates for the position, Ole Gunnar Solskjaer eliminated them all with an impressive record, picked up 32 out of available 39 league points and has pushed United past the UEFA Champions League Round Of 16.

Manchester United under Ole Gunnar Solskjaer defeated Pochettino’s Tottenham Hotspur 1 – 0 at Wembley in January, with both team now fighting for top four spots. Tottenham at third and three points above United at fifth.

“I never talked about rumours,” said the Argentine, who is preparing his team for Sunday’s trip to league leaders Liverpool, live on Sky Sports.
“I need to congratulate him and wish him all the best, now he is officially the new manager of Manchester United.
“I am not going to talk about rumours and in this period there is going to be more rumours, but there is nothing I can do about it.
“If it is not this, speculation is going to come around from another club, we are focused on our Job.