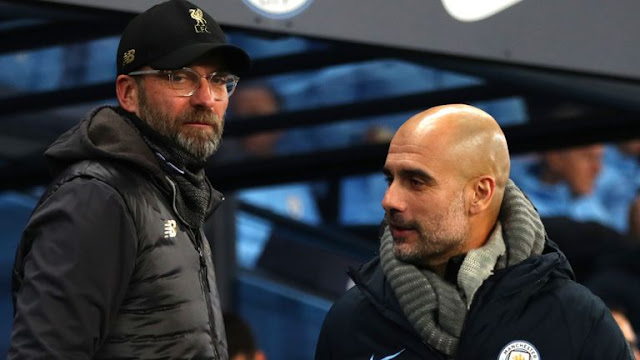 ↑ Grab this Headline Animator
Manchester City are two points behind Liverpool FC at the top of the Premier League. howbeit, with an outstanding game and eight games to the end of the 18/19 Premier League season.
Despite those facts stated above, Manchester City manager Pep Guardiola doesn’t seem bothered about Liverpool’s form or performance.
With a win, Manchester City will have the opportunity to top the league again, though temporarily till Liverpool face top four contenders Tottenham Hotspur on Sunday.

Pep Guardiola believes Manchester City can win the league, if they could maintain focus on winning the remaining games of the season rather than being distracted by Liverpool performances.

“It is better not to look too much at your neighbour [Liverpool],” Guardiola said. “They also are still in Champions League. When you look elsewhere, you drop points.
“We saw that you can get beaten by anyone, so we must focus. I prefer to be in front – it’s all about our performances.
“To win titles? Win every game. It’s about playing with pressure, it’s a game here, then another, anything can happen, but the only option is to win, then we see how far we go. Destiny is still in our hands.
“I’m not thinking about Liverpool, it doesn’t matter what they are doing. You need to get back in the rhythm, everyone has their own situation.”