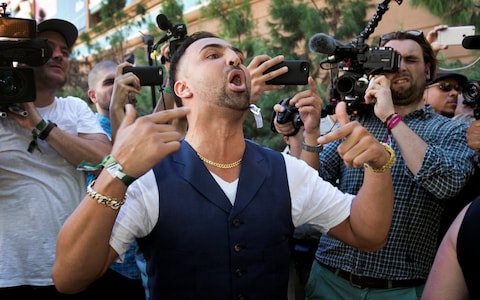 ↑ Grab this Headline Animator
Former two-division champion Paulie Malignaggi is making a switch to Bare Knuckle Fighting Championship (BKFC) and is expected to make his debut in June.

“BKFC is the new wave in combat sports. They’re doing great things and I’m very excited to be a part of this organization,” said Malignaggi. “I’ve accomplished some big things in boxing career, and I look forward to what this next phase brings. After a long boxing career, it’s easy to miss the limelight and the rush that combat brings. I look forward to getting back in action and the new challenge of fighting for BKFC.”

Malignaggi, who was recently in the spotlight for his spat with UFC star Conor McGregor, spent his professional boxing career at super lightweight and Welterweight winning titles in those divisions.

“This is great signing for Bare Knuckle Fighting Championship,” said BKFC Founder and President David Feldman. “At this time in our company’s growth, we needed to add a legitimate and well-established world champion boxer to our roster, and I believe with Paulie’s ability and personality we’ve done just that. Paulie is the perfect fit for us.”

Paulie Malignaggi retired from professional boxing after 38 fights, out of which he got eight loses and seven wins by Knockout. Losing to Sam Eggington in his last fight, Malignaggi had won three of his last four fights and was tipped to return after his alliance with Conor McGregor got soiled.