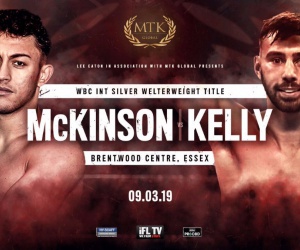 Unbeaten WBC Intercontinental Silver Welterweight Champion Michael McKinson (15-0-KO2)  will be defending his title against the very dangerous Ryan Kelly (13-1-KO7) in thh Main event of a Card promoted by MKT Global at Brentwood Essex, United Kingdom on Saturday 03.09.2019 at 02:00 PM ET.
The card will also feature Southern Area super-lightweight king Sakyi (7-2-KO3) defending against challenger Hill (8-2-2-KO2).
Mckinson dominated and defeated Sam McNess at York Hall, in his last outing to claim a spot in the world rankings. He will be hoping to build on that victory and hopefully retain his unbeaten record.

Delivered by FeedBurnerWith much of the cards still yet to be announced MTK Global President Bob Yalen, hopes the promotion will be able to stage a good night of Boxing

“We’re relishing the chance to go and put on yet another fantastic show at the Brentwood Centre, which has become one of the headquarters of the small-hall boxing scene” Bob Yale said.
“There have already been some absolute classics on MTK Global shows in Brentwood with several titles on the line and we’re looking to step it up with each and every show in terms of the quality of the fights, the production and the event in general.“In addition to true 50-50s at the top of our cards, we’re looking to provide a stage for some of the sport’s brightest prospects – both domestically and internationally – to send rivals and fans alike early statements.“The last few shows we’ve put on at the venue have sold out and we’d like to take this opportunity to thank the fans for their continued support. Without them, events like this simply wouldn’t happen.”