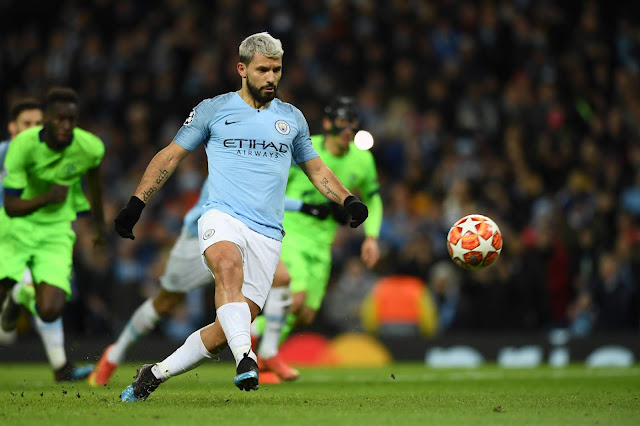 ↑ Grab this Headline Animator
Key Moments Recap :
Goal : Sergio Aguero (pen.) 1 – 0
Not much else to say, really. Ultimate cheek from Aguero. He sits Fahrmann down and dinks it down the middle.

It’s Gundogan again making it, finding Sterling behind the left-back with a fine ball. Sterling squares for Aguero at a tight angle, he has three Schalke defenders around him, but still manages to squeeze a shot between the legs of Fahrmann and into the net.
Goals : 42′ Leroy Sane 3 – 0
Zinchenko with a superb ball behind the right-back Bruma for Sane, who is in acres of space and through on goal at a bit of an angle.No problem for Sane, however, as he strokes the ball under Fahrmann and into the net for 3-0! Not much of a celebration from the former Schalke

Man Of The Match : Leroy Sane

Raheem Sterling has been directly involved in nine goals in his last four starts for Manchester City at the Etihad in all competitions (six goals and three assists).

Preview
Manchester City head into the UEFA Champions League Round of 16 Second leg with an away 3 – 2 advantage and stand favorites to qualify for the Quater finals but will have to contain a very dangerous Schalke 04, one more time.

Manchester City dug deep to overturn an early lead by the Germans in the first leg and has them needing two goals without reply to qualify for the quater Finals.

Both teams have contrasting forms, Manchester City leading the Premier League table with six wins in their last six on all competitions. Schalke 04 on the other hand, have lost five of their last six games in all competitions, which includes their Champions League defeat to Manchester City and their 4 – 2 loss to Werder Bremen on Friday. They are presently 14th on the Bundesliga table with just four points from the relegation zone.

Nicolas Otamendi and Fernandinho will miss the second leg due to suspension, while Fernandinho (groin), John Stones (groin), Kevin De Bruyne (hamstring) and goalkeeper Claudio Bravo (Achilles) makes up the City absentee list, while Aymeric Laporte might probably return after overcoming a Hamstring.

Alessandro Schopf out for the season for Schalke, while  Daniel Caliguiri (ankle) and Omar Mascarel (groin) are still nursing their injuries.