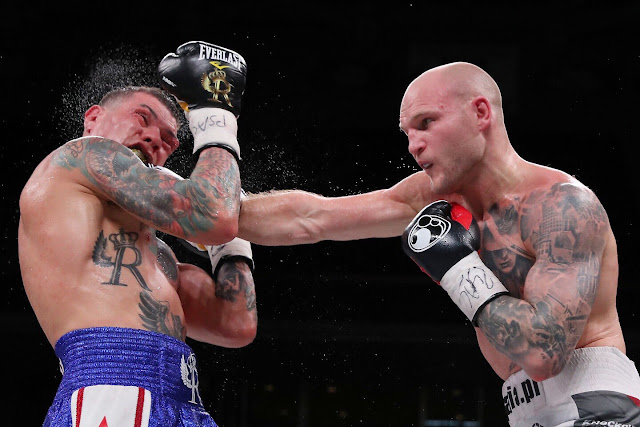 ↑ Grab this Headline Animator
Maciej Sulecki stunned Rosado early in their WBO International Middleweight Championship fight and went ahead to defeat him by unanimous decision to win the title.
Sulecki found his timing early in the bout, sending Rosado to the canvas, he took the furst and second round but Rosado gradually grew into the fight took the third round and forced a close fourth round.
Sulecki stuck with the distance hidding behind the jab and took the fifth round and also taking the sixth, as Rosado could not close in for a clean shot

Delivered by FeedBurnerRosado fought the sevents round to his favor, subjecting Sulecki to a series of flurries that almost brought the venue down. The fans went crazy.

Sulecki In Round 8, dropped Rosado again after he was off balance from throwing a combination. Was a better round for Rosado until that point. He spent the final moments dodging Sulecki’s punches. It’s 77-75 for Sulecki.

In Round 9, Rosado came back knocking Sulecki down twice. Hold onto something the roof on this place is about to go! it’s anyone’s fight now! Let’s call it even and the 10th decides it!.

The Final round was electric! Rosado pushed the entire time and threw bombs! Crowd loved every second.